Humans, like the weather, are nothing if not contrary. Can it really be the same species that were so recently sharing in collective despair with heartfelt empathy, ceaselessly giving anything from money to clothes to fence posts to time to hope, who now go about pulling each other’s hair out for another six pack of three ply?

It may well be, much like the weather, that in the Venn diagram of the good and bad, the heart-warming and the head-banging, there is only a little intersection between the two. Or perhaps we are all a little conflicted. Like a leaden cloud threatening to burst or simply waiting to be dispelled by the sun. Depending which way the wind blows. A phenomenon that might also explain the contents of certain supermarket trolleys.

What seems incontrovertible is that 2020 continues to produce a hell of a lot of crap, evidently more so in those double garages stocked with 2,000 rolls of toilet paper. And while the bare aisles of toilet tissue land make me feel bemused, I quietly sneak an extra jar of pasta sauce into my basket.

There could be fewer worthy places to stockpile a years’ worth of bog roll than on the South Coast of NSW. A beautiful corner of the world both pallid and sick and overflowing with life and love. A place whose interior is savaged but whose heart and soul are still beating. A place that could use a little helping (washed) hand to thrive once again. Mother nature has applied some balm through its cloud and rain and now we – the good we – can try to offer a little gentle sunshine.

The landscape of the South Coast region right now is simply astonishing in so many ways. The crest of Clyde Mountain confronts with brutal savagery, an unending parade of blackened trees and blackened earth yielding views down to the coast that were not previously available. Yet the vibrant tree ferns and epicormic shoots sprouting from trunks seem to defy death. On the fringes of Mogo, that all too familiar sight of summer – of twisted metal and crumpled fireplace – sits within a vivid, bounteous green. The village too a bustle of people purchasing pendants, peculiarities and pies.

The beaches of the region are as good as ever, which is to say, pretty damn perfect. At Broulee, a small patch of charred dune prompts memories of a video from the beach on New Year’s Eve, a small spot fire exploding and causing understandable angst amongst those who had fled to the water’s edge. Today, the sands are peppered with people bathing, fun and laughter filling the air. Much of the lush coastal fringe of spotted gums and fern trees along the road to Moruya seems unscarred. 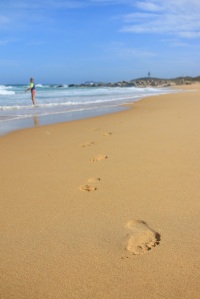 From Tuross Head you can see the ranges of Deua National Park to the west. No doubt a regular sight of alarm at night, illuminated by flame that flickered and flared to its own shape and will. Constantly on edge, unknowing as to where and how far it would come, the fires never did reach Tuross, at least in physical form.

This is home for a few nights and what a fine home: close to the rugged beaches and barely open shops, in proximity to numerous opportunities to spend money and eat food and lose golf balls. A home coming with the bonus of a billiard table for evening entertainment; my knowledge on the placement of snooker balls stemming from lyrics recalled of Snooker Loopy featuring Chas and Dave. Pot the red and screw back, for the yellow green brown blue pink and black… Yeah, in your dreams. 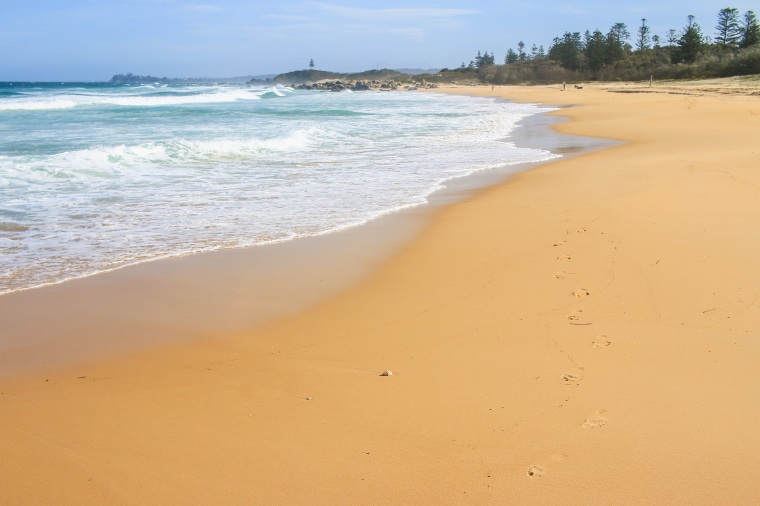 It would be fair to say that despite limitations I was a far better snooker and pool player than golfer on this trip. Which says more about my golfing doom than my snooker prowess. Still, it was good to make a hefty contribution to the community of Narooma by zig-zagging around its golf course. A perfectly sliced and skied lay up on its famous third hole almost yielded a par, and I managed a par four somewhere else in between much larger figures. The added challenge of a series of greens being perforated, sanded and watered provided further good excuses for inadequacy.

With Narooma receiving an economic injection, the next place on the spending list was Bodalla, specifically its dairy and cheese factory. In times like these you’ve got to do your utmost to support these local businesses and so it was with considerable reluctance that I forced down a toastie oozing with cheese followed up with an ice cream. You do what you can do.

The following day endured cool and grey, reminiscent of typical coastal awaydays of the past. This might have previously induced disappointment and grumbling and a roll of the eyes with a sigh. But it seems crass to complain this year. This weather is perfect. And there is still plenty of consumption of local community produce to be savoured.

I don’t know if supporting the South Coast economy has ever been so tasty. The one exception was – alas – fish and chips, a result of many of the better venues being closed on a Monday in March. But there was the Mexican brunch bowl at Mossy Point, the caramel fudge and coffee in Moruya and – probably the piece de resistance of feeling worthy and eating well – home-cooked wholesomeness and other takeaway from the farmers markets also in Moruya.

The markets were small but popular, a place very much for locals to gather and update one another on the latest news and gossip. They were also attuned to market protocols, forming orderly queues with wicker baskets as they awaited the 3pm opening bell. Twenty minutes later and most of the fresh stuff had sold out, but we managed to retrieve a medley of locally grown seasonal vegetables, some swordfish, crusty bread and a dairy product or two for me to bring home to go on a scone or three.

I can’t say our market-supplied barbecue that night was a traditional Aussie bloke-themed methane-heavy slimy snag and slab of steak celebration. But it felt good and tasted even better. Refined even. Setting up another classy evening of exemplary three-way snooker (Tuross Rules).

Which was again better than the golf that day. Looking for something to do we came across a whole nine holes to ourselves. It quickly became clear why, the course pretty basic and unkempt in places, plagued by an infestation of mosquitoes. These had apparently emerged post fire and rain, proof that not all of nature’s recovery is especially welcome. At the course boundary, fire had penetrated the forest and the relatively low fee to have a course and a million mozzies to ourselves didn’t seem such an injustice after all. 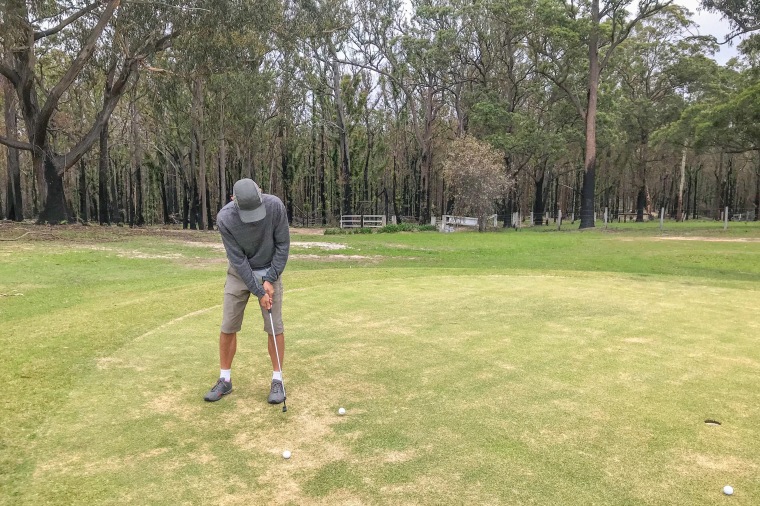 You see, it’s quite a divergent experience down on the South Coast. Like chalk and cheese. Sunshine and rain. Go Fund Me and bog-roll violence. So much of it looks and feels as good as ever. Life seems normal. Better even given the incredible swathe of green pasture now smothering the fields. And then your mind comes back to that saying I heard before: the great green cover up.

And you drive, under bucketloads of rain, through Mogo once more with its scattering of crumpled buildings. Towards and into the edges of Batemans Bay, where the forest has scorched down to its very edge and looks like it is struggling to recover. You get a sense of where the fire was most ferocious; green shoots are harder to come by. One side of the road up Clyde Mountain looks normal, the other decimated.

You enter Braidwood to support that economy, knowing that it would be near impossible to convince an overseas visitor that this was in the grip of drought, primed to borrow water from Canberra while being shrouded in smoke for months on end. You shelter with hot coffee and sense BlazeAid nomads taking a well-earned day off. You espy a generous supply of toilet paper in the café bathroom; and briefly a wicked thought enters your mind. But the sunshine wins out, the goodness, the heart. Much like it is doing, much like it will do again, down on the South Coast.