Can there be anything more symbolic of returning to work than a shave in a dingy motel room in regional Australia? As two-week-old stubble clings stubbornly to off-white porcelain, a sense of beige pervades, worsened by the 1970s tiles and a toilet hygienically sealed by a useless strip of paper from the same era. Thankfully – in this case at least – the ironing board remained lurking in the cupboard.

Fast-forward a few days and the work was done, proving less cumbersome and far more populated with coffee and cake than I could have hoped for. This left me alone with a car and a few belongings close to the Queensland-NSW border. A massive part of me wanted to make the journey home as quickly as possible, but then an equally massive part also yearned to stop in Warrumbungle National Park. Another significant consideration was a determination to miss the whole messy Newcastle-Central Coast-Sydney conglomeration. This along with the fact that, heading inland, I could go through Texas tipped the scales definitively south and west. Yeehaw.

Sometimes when you return to a place for the second time it can underwhelm. This is especially the case if you have rose-tinted memories involving walks along rocky ridges and dry sandy creeks, absorbing earthy eucalyptus scents and far-reaching views. I had this concern approaching the Warrumbungles, but left concluding this is one of the best national parks in the whole of Australia.

Of course, all of this is entirely subjective and hinges on whatever floats your boat. For me, the campground offers a good starting point – scenic and spacious with decent facilities to make camping again seem less of a chore. Pitching the glamping tent / mower cover beside gums with views of Belougery Split Rock, you are at once at one with the land. Until a whole family sets up shanty next door.

To really appreciate the Warrumbungles you need to walk, and – ideally – walk upwards. I had done this before on the signature Grand High Tops hike and so was hoping to find something a little different. And what better than that mountain I could see from my tent, in late afternoon sun still scorching the land upwards of thirty degrees?

Admittedly the initial stages of the walk up Belougery were a little taxing – seared by the hot westerly sun and, naturally, uphill. But each step enabled a strategic pause as a landscape of gorges and peaks became incrementally exposed. Rounding a corner and into shade, the views expanded before the rocky clump of the Grand High Tops made themselves known.

I could scramble a further 800 metres to the very top, but this route was littered with warnings about rockfalls and climbing and three-headed drop bear spiders. Besides, contentment comes in many forms including a sit down on a crag drinking a blissfully cold lemon Solo leftover from last night’s KFC in Moree. Mission accomplished, and the views really couldn’t get that much better surely.

By now the harsh heat had started to fade and it was a beautiful early evening heading around the rock and down towards the sinking sun. This is a magical landscape, an eden of elemental Australia dramatically rising from a sea of golden plains. Clarity under a big blue sky, sun-baked and scented by the fragrance from dried out forest. A place even better second time around. 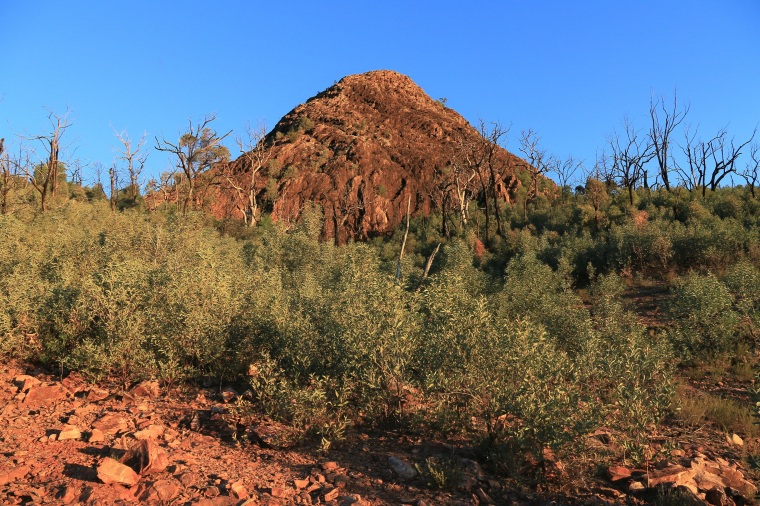 One final thing to cross off

With all the marvellous travelling with Dad, all the sights and sounds of late, from a harbour island to a smoky cape, along waterfall ways and luxuriant bays, climbing plateaus and canoeing among glades, Easter arrived in something of a haste. Waking at the campground in Warrumbungle National Park on Good Friday, I was glad to have ticked off that special walk last night and ready to tackle the final stretch home.

I was even more glad of my foresight in buying some hot cross buns and a block of butter in Coonabarabran yesterday. What better way to use the camp stove for the last time, to set me on my way to Gilgandra, to Dubbo, to Wellington, to Molong, to Canowindra, to Cowra, to Boorowa, to Yass and – 550kms later – to Canberra.

Moments can be made in small packages of fruity dough topped with lashings of butter as well as epic landscapes and outdoor escapades. So many moments that meld together to form memories that will stand the test of time. And if they don’t, at least some are now documented on a trivial little blog in a remote corner of the Internet! To use a well-worn phrase again, MISSION ACCOMPLISHED.