In all honesty I wasn’t expecting the BBC weatherman to tell me it was going to be “a bit of a scorcher.” Sure, I had a little snigger when I noticed a forecast top of 23 degrees, but this was immediately more supreme than anything last August and thus way beyond expectation. Somehow my arrival in England had coincided with a few days of summer, as if the leafy countryside wanted to show off and reassure me that everything is still okay really, fingers crossed.

The blue skies over Basingstoke proved ideal to escape Basingstoke and blow off the airline induced cobwebs gathered over the South China Sea and entire Russian landmass. Now, somewhere on the more compact Hampshire-Berkshire border I faced chalk downs, golden fields of wheat, abundant hedgerows, village greens, and the astonishing threat of sunburn. For once, the summer I entered was better than the winter I had left behind. 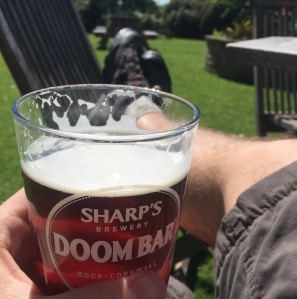 All this bucolic traipsing on foot is thirsty work and Dad was more than content to fulfil my request for an English country pub beer garden experience. Doom Bar on tap was an added bonus at The Vine in Hannington, suitable tonic to march on and out towards more panoramic views. It might be the beer, but I simply cannot fathom how there can be so much countryside in one of the most densely populated corners of a tiny island. Where do they hide them all? 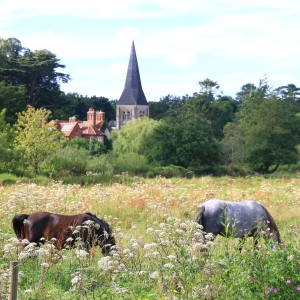 While the following day was a little more cloud prone, the afternoon perked up and acclimatisation was in full force with the continued wearing of shorts. This does herald the risk of attack by rampant stinging nettle, but it’s a relatively benign one by Australian standards. And the risks bring more ample reward around Whitchurch and the meandering, translucent waters of the River Test. Such as pretty mills and meadows and cows and flowers and ice cream. 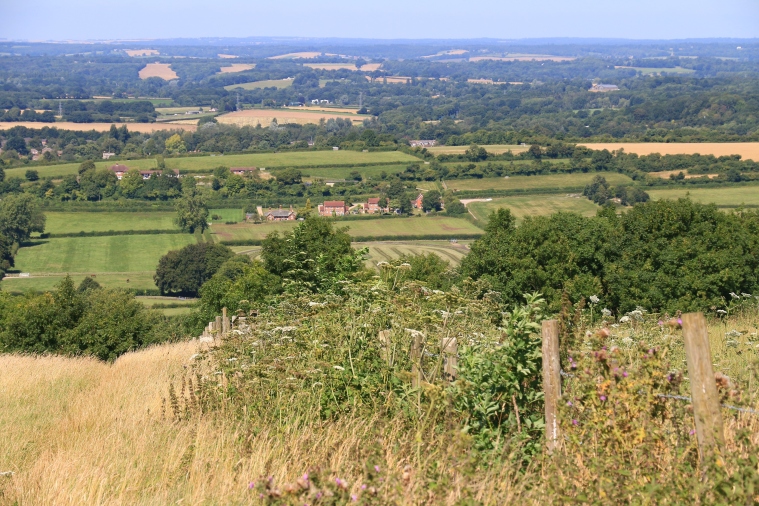 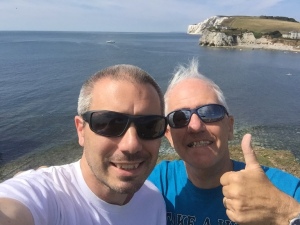 If you’re getting bored with so much idyllically clichéd countryside (and, jeez, why would you?) let me take you to the coast. Obviously not (yet) the coast with the most, but a little island sitting off Hampshire. Reached by a placid ferry ride from Southampton, The Isle of Wight offers fine bays, meandering tidal estuaries, and hulking cliffs, all wrapping an interior of yet more idyllically clichéd countryside. 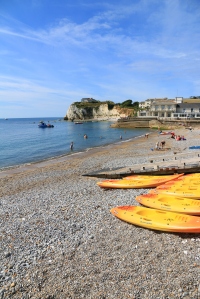 On a sunny Sunday in August it’s a popular spot, but some fortuitous ferry disembarkation took us briskly to the western end, where the hair-raising joy of an open top bus awaited. Clattering into branches, dipping and swerving round bends, threading through thatched villages, we survived to Freshwater Bay. Where everything was rather more sedate. Glisteningly, tranquilly, satisfyingly, balmily sedate.

The big attraction in these parts is of course The Needles. The place even has its own theme park but mercifully it has not impinged the natural attraction of these iconic, dazzlingly white blades of rock. Visible from a viewing platform, sunglasses are very much needed, as are cunning tactics to jostle your way through dawdlers and selfie takers in order to snatch a glimpse.

Views are easier to come by from the chalky headland itself, sweeping across the island and over to huge swathes of southern English coast and country. From here you may see fields and cows, cottages sitting in valleys, chugging boats plying the blue horizon. Somewhere down there are cosy pubs and seagulls swooping on fish and chips, a queue or two and sweaty people muttering that it feels a bit too hot today. A gritty sandcastle is stomped in a childish tantrum while a couple of ramblers chomp on a cheese and pickle sandwich on a conveniently located bench, in memoriam to Bert Poppleton, who came here each morning for seventy years, apart from when he was serving in the RAF during World War II.

From here, it is as though a vision of England is laid out before you. If there was any doubt what with all this sunshine, confirmation comes in the form of the double decker open top bus, a trusty and thrillingly hazardous steed to take you back down, once again, into that land.