The town of Te Anau has one of the most unexpectedly elongated high streets perhaps anywhere in New Zealand. Plonked in the remote southwest corner of the country, it possesses two supermarkets, three petrol stations, at least four places where you can buy pizza, several pubs, numerous cafes and restaurants, something resembling a department store and more shops selling sheep key rings than you can shake a shepherd’s crook at.

The reason for this is – principally – Milford Sound, with Te Anau handily positioned as a coffee / lunch / afternoon tea / dinner stop on very full day excursions from Queenstown, or as a closer base from which to discover Fiordland. And while most trippers and trampers understandably head for the hills, Te Anau has a certain charm that is worth a linger. Despite the throughflow of visitors, it seems a lot quieter and subdued than Queenstown or Wanaka. The countryside around is greener and lusher, and its lakeside situation with views across to snow-capped peaks is divine.

Lest Te Anau get a little too busy we stayed a tad out of town in a log cabin wedged into the side of a hill. This was the Barnyard Backpackers complex, and while it retained a style of basic but comfortable accommodation, I was struck by how different staying in hostels is these days. Mostly this is down to the internet and its ability to transport you away from the here and now. So while I may have played shithead accompanied with a bottle of cheap wine with a group of randoms twenty years ago, nowadays it’s all about WhatsApp calls home and squinting solitarily into a small screen. Something I did with limited success thanks to all the bandwidth being taken up by WhatsApp calls to Germany! Still, at least here you can just look up and soak in the views. 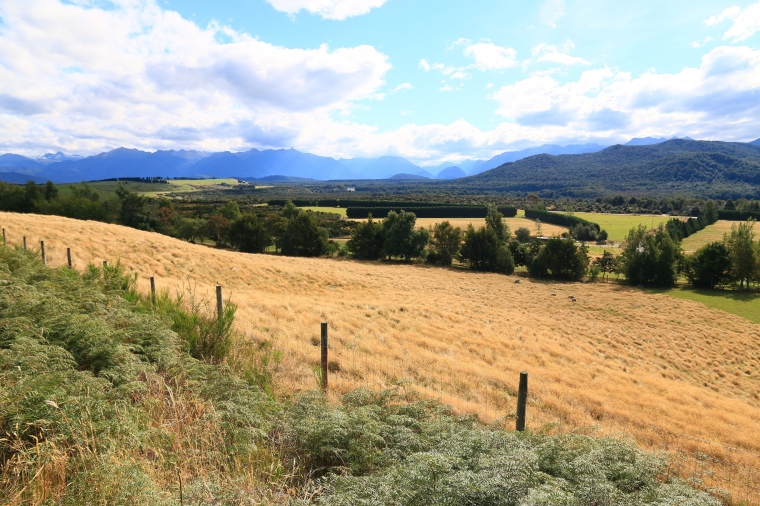 From Te Anau, the inevitable stream of people and cars converging on Milford Sound benefits from a little strategising; a calculation involving the avoidance of peak coach tour times, maximum weather and reflection opportunities, and which of the plethora of boat trips to pick. But really it’s just luck and we got pretty lucky. Striking out early via a coffee stop at the Sandfly Café, dawn light gradually infiltrated the Eglinton Valley, the sunlight and early mist rising from the river serving to accentuate its majesty.

The calm of morning also meant that Mirror Lakes were actually mirror-like, reflecting the glowing mountains, and observed by just a smattering of early day-trippers like us.

The sunny start changed around The Divide as we headed into the clouds and prospects for a clear cruise on the sound were diminished. It was the kind of weather I expected, typical of this area which is famed for being the wettest spot in New Zealand[1]. But emerging into and out of the Homer Tunnel there were breaks, mountain tops could be seen, and the winding road down to the water remained largely clear. Sure, it was not the rare blue sky day that you see in the advertising, but the pinnacle of Mitre Peak emerged, the tide was in, and there was ample time for relaxation and reflection before hitting the water.

This was to be my third visit to Milford Sound and each time has offered different conditions. The first visit was one of those wet affairs that delivered little visibility, only compensated by numerous spectacular waterfalls plunging from the heavens; second time around gave some blue sky, a brisk breeze and significant glare; and today was without doubt the most placid I had seen it, clear, calm under a high level white sky. Seasickness would not be a problem.

And so the obligatory cruise, which is a very pleasant experience but one which somehow you are fairly content to finish after two hours. Up to the Tasman Sea and back, taking in waterfalls, forests and seal-dotted rocks, neck-craned constantly to fathom the height of the precipitous mountains that encircle the fiord. The scale is hard to comprehend and harder to capture, but a steady stream of sightseeing planes and choppers looking the size of seagulls against the cliffs provided a persistent sense of perspective. All washed down by a ‘glacial facial’. 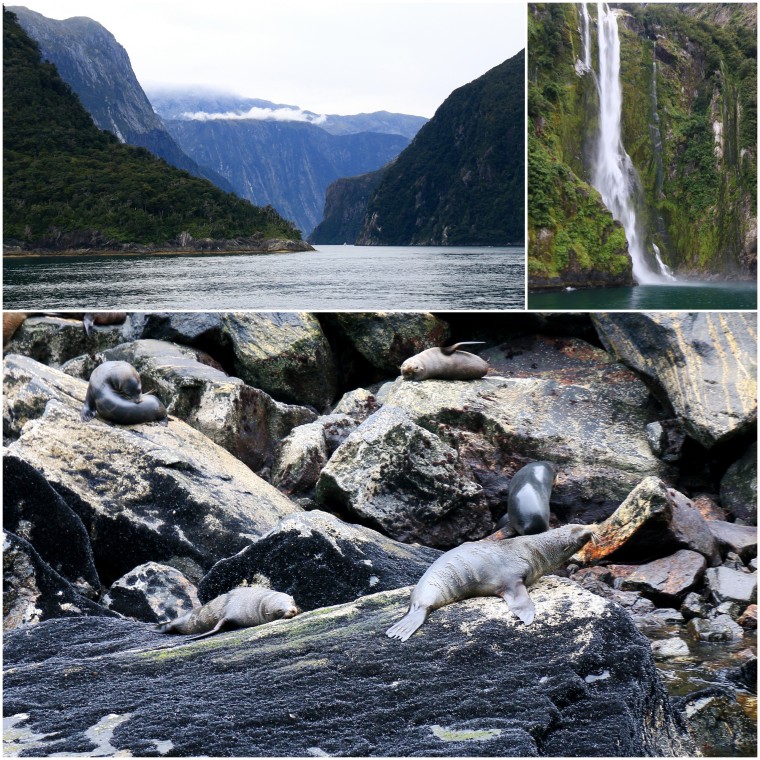 Our cruise finished at 12:30, meaning we had time to pause along the road back to Te Anau. What was an empty coach park (containing at least 40 bays) when we set off on the boat was now crammed, and the tide receding and breeze rising had scuppered any iconic Mitre Peak reflections for the masses. Strategy or luck, it ran out briefly at The Chasm, where we lingered long for a car park and failed to find a delightful glade for lunch. But further stops along the highway offered more opportunity to delight, to take in waterfalls, peaks and pristine river valleys.

Back in the Eglinton Valley – where it had all really started this morning – the warm sun was once again shining and the day did its very best to resemble an idyll. I was more than happy to linger here, to wallow in the golden grasses beside jade waters, while Dad wallowed in a little fishing time. And even if the trout don’t bite so much here, surely in such a setting netting doesn’t matter. 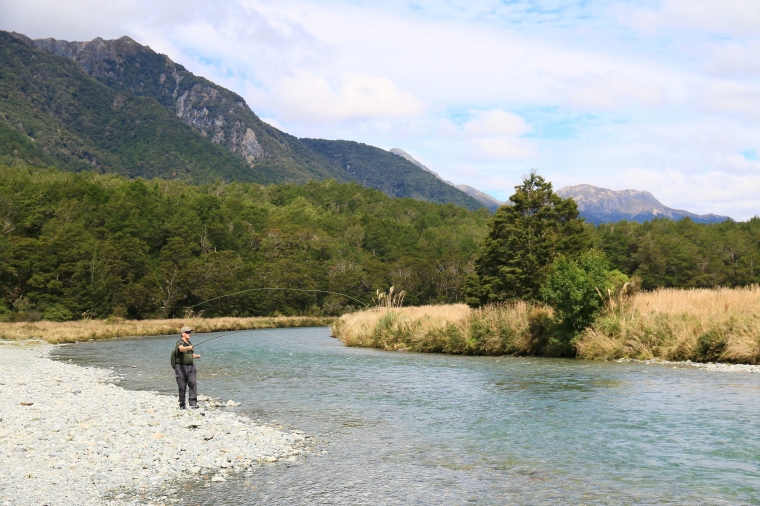 It turns out the better (aka easier haha!) fishing spots are closer to Te Anau. A prime spot to dump Dad and take the hire car for a bit of an explore, down south of Te Anau to Manapouri. If Te Anau had a serene calm about it, Manapouri was decidedly comatose. But I mean that in a good way, the lake wild and rugged, visitors few and far between and mostly heading toward or coming back from trips to Doubtful Sound. Doubtless there are trout here too, on the edge of the world.

With this little foray, three hours and five fish had passed and we joined up to dine on takeaway pizza in the car overlooking Lake Te Anau. The breeze was up, the weather closing in a little, the car rocking. Omens of the mostly fine post-cyclone weather that we had enjoyed in the last few days coming to an end. It was looking as if rain might just visit us again, transforming Milford Sound to a funnel of waterfalls and blowing us back towards our final stop, Queenstown.

[1] The day after our visit, Milford Sound received over 30 centimetres (not millimetres!) of rain