As a new year begins, the summer holidays are in full swing down under. Nowhere is this more evident than at road service stops up and down the land. At Goulburn, interstate and overseas travellers revel underneath the glory of the Big Merino, custard slices and cappuccinos fly off the shelves of Trappers Bakery and Maccas is a frenzy of Frozen Coke Spiders and toddler tantrums. Downtown, the high street is at a crawl as people are confronted with the idiosyncrasies of rear angle parking demands that necessitate a protractor for the first time since high school, and inevitable queues form for drive-thru beer and ice.

Most cars are heading up or down the Hume Highway, towards Sydney, Melbourne or – even – Canberra. And / or beyond. Fewer are taking an alternate road north, across golden farmland and riverine gorges, passing through the town of Taralga and very little else until reaching the bright lights of Oberon. Here, west of the gargantuan expanse of the Greater Blue Mountains, fingertips of road and trail penetrate into the edge of wilderness.

Kanangra-Boyd National Park is the second largest tract of wilderness in New South Wales. Which is remarkable really when you think that Sydney almost brushes up to its eastern edge. The largest wilderness area, incidentally, is Wollemi National Park, also a part of the Blue Mountains. That’s a lot of bush out there.

Arriving on a cloudy afternoon, there was – to put it less than mildly – a freshness in the air at Boyd River Campground. Indeed, the scene of a tin-roofed wooden hut among the gums was more Kosciuszko in June than Kanangra in January. The fireplaces were looking like an entirely appropriate adornment.

Walking helped warm things up a little and the gloomy view of Kanangra Walls was eclipsed by the natural serenity around Kalang Falls. This required a little descending beyond the escarpment edge and each step below evoked a sense of immersion in something elemental and pristine. As well as the pervasive eucalypts, native flowering shrubs and bonsai-sized pines and cedars clung happily to the rocky outcrops. Ferns adorned the pools and watercourse of the creek as it disappeared down and down into depths unseen. A trickle seemingly so insignificant continuing to somehow carve out this impenetrable gorge country.

Back at camp, the summer idyll of cold beers and chicken salad was challenged by the increasing chill. My only pair of long pants and only hoodie were barely enough to keep the cold at bay and the folly of not bringing any extra blankets – in January for goodness sake – was prescient. The smokiness of a fire was price worth paying for a little extra warmth and some extra evening entertainment.

Entering the cocoon of my swag for the first time in a year a light drizzle began to fall, which persisted all night and into the next morning. While it was nothing substantial – more a case of being in the clouds rather than under them – it was enough to disrupt sleep as moisture gathered on the tree branches and fell as droplets drumming onto the canvas above my head. Waking for the umpteenth time, dawn revealed a silvery lustre of leaves and gloom among the gums, only lightened by the invigorating and fragrant freshness. Still, it would be cool and calm conditions for a gentle bike ride…

And indeed, by time we got underway some of the gloom had lifted and the initial pedal on smooth tracks though the forest was heartening. Things began to go downhill as the terrain went more steeply and precariously downhill (described as “gently rolling”), compounded by creek crossings and the nagging knowledge that at some point climbing would be inevitable.

So it was that the trail transformed into an archaic roadway of logs and rocks, mud and puddles, seemingly unending in the depths of the forest. Each bend revealing another uphill slog or treacherous dip, with the prospect of the good dirt road on the horizon yet again dashed. Somehow, we all stayed upright, our bikes remained in one piece, and we just about managed to keep sane. Just. Finally, the sight of the good dirt road, leading to a smooth, mostly downhill ride back to the campground, was nirvana itself.

A sense of achievement was palpable over lunch, which took place under sunny and warming skies. Tents dried and sleeping bags aired while sunscreen and hats were now de rigueur. The morning travails were slowly beginning to dissipate though I am sure they will never be completely forgotten. Managing to drag ourselves from such placid relaxation, we revisited Kanangra Walls, which offered a far brighter scene in which to marvel at monumental sandstone country. 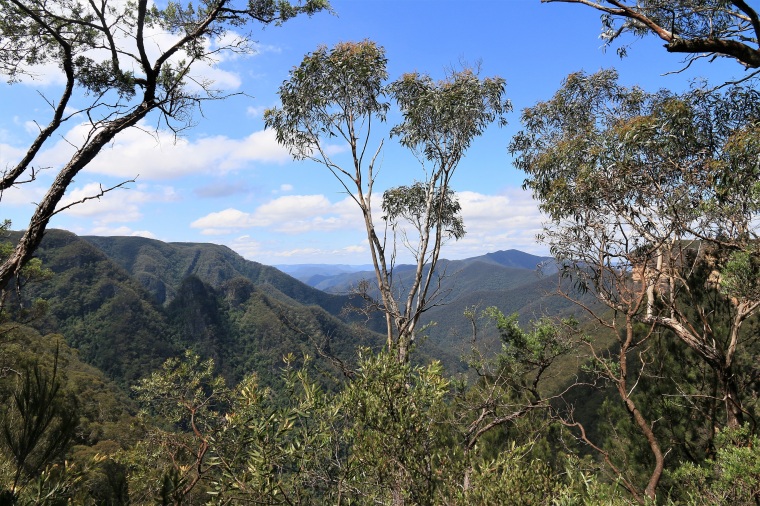 Being energetic types, we embarked on a walk along the plateau in the afternoon which – naturally –  only involved a few minor ups and downs. Panoramas were a regular companion, the vertiginous cliff line giving way to a green carpet plummeting down into infinity. Caution was high on the agenda peeping towards the precipice, a dizzying spectacle in which you hope not to be consumed. Let the snapchatting youth and boastful backpackers perch on the edge, for we have had enough adventure for today thank you very much; and how much more of a thrill do you need than being a part of this landscape, an insignificant dot in such spectacle.

Working up a thirst, the cold beverages on the second – and final – night were far more fitting. By now, any clouds and wind had completely disappeared and the forest was aglow in the lingering end-of-day sunlight. Even my one-pot cooking failed to ruin the experience. We had been through the tribulations of the trails of dust and drizzle, creeks and climbs and were being generously rewarded. Finishing on a high, Australia at its summer holiday best, and you, and a couple of friends, immersed within it.

Attempts at Devon. With some obvious issues. Great to see things greening up though. Come on you greens 😊 . . . . . #green #creamtea #cake #countryside #canberra #australia #food #devonshiretea #lanyon #visitcanberra #explore #farmlife #outdoors #bluesky #summer #treat
Brooding . . . . . #sky #storm #weather #clouds #thunder #landscape #canberra #visitcanberra #abcmyphoto #explore #outdoors #walk #rain #australia #summer #troppo #nature
Love is... The joy of becoming part of a wilderness on your doorstep. Hoping this beauty will recover, as it has done before. I wrote a blog post full of Namadgi memories, recent and past (gbpilgrim.com -link in profile) . . . . . #wilderness #landscape #views #nature #hiking #australia #bush #mountains #outdoors #explore #travel #canberra #namadgi #visitcanberra #sky #light #colours #bushfires
Survivors . . . . . #eucalyptus #australia #nature #wildlife #trees #outdoors #walk #explore #sky #actparks #colours #drought #bluesky #canberra #visitcanberra
Could use rain. Smoke in the background is from the Orroral Fire, which has now burnt through 850 square kilometres of Namadgi National Park, equating to around one third of the ACT. Most of the smoke visible this afternoon was a result of backburning operations, hopefully to safeguard Tidbinbilla Nature Reserve which is at the northern edge of the fire front. Rain is forecast over the next few days... bring it on! . . . . . #landscape #australia #drought #bushfires #canberra #countryside #nature #light #clouds #walk #outdoors #explore #visitcanberra #bushfiresaustralia #canon #colours #view #actparks #abcmyphoto
Who ever said Canberra was dull? At least the morons sent by the people of Australia to our home to supposedly run our country will get a taste of this in their throats tomorrow . . . . . #sunset #smoke #bushfires #canberra #lake #bridge #sky #colours #silhouette #reflection #visitcanberra #australia #abcmyphoto #abccanberra #bushfiresaustralia #drama #canberrafires #summerfromhell
Today’s scenes - Orroral Fire in Namadgi National Park taking hold . . . . . #bushfiresaustralia #canberra #australia #fires #smoke #orroralvalleyfire #summer #bush #abcmyphoto #abccanberra #emergency #views #nature #canon #endlesssummer #canberralocals
It ain’t over ‘til it’s over . . . . . #bushfiresaustralia #views #smoke #sunset #clouds #landscape #canberra #visitcanberra #australia #abcmyphoto #nature #outdoors #fire #light #evening #canon
The last two days spent clearing fences on Paul and Andrea’s farm has been a challenge. But also incredibly uplifting. On top of a hill in beautiful country near Batlow, everything bar their home was blackened as fire attacked from three sides. Their farmhand, Smiley, lost his hut and possessions, while the forest they use to produce eucalyptus oil is reduced to ash. One thing they haven’t lost is their generosity, humour and warmth. From Smiley sharing tales of giant fish caught in the dam to their experiences saving their home and each other on January 4th, they have welcomed us amateurs into their world with open arms. Fixing fences and building bridges. The highlight of today was being welcomed back to their home after pulling out our last fence post, sheltering from the blessed rain and being offered a cold beer along with a pack of eucalyptus oil and soap. The gift was lovely, a sign of their kindness, but chatting for half an hour like old friends at the end of the day was even better. Conversation and connection matters in times like these! They have really touched me and, as tough as things are, they are getting on with life as best they can. A positive from the fires they pointed out is that it cleared the land of all the invasive blackberries! And Smiley is gonna rebuild a hut where he can again dream of teaching a young dog some old tricks. 3.5km of warped and charred fence cleared. Tomorrow is another day, another place. Check out BlazeAid. . . . . . #community #countrylife #australia #bushfires #farm #nsw #batlow #snowyvalleys #blazeaid #bushfirerecovery #landscape #fires #volunteering #tumut #eucalyptus #hivis