Compared with the mostly endless expanse of the Northern Territory and Western Australia, the southern state of Victoria is far more manageable to grasp. With its rolling green hills and web of country roads punctuated by amenable towns, it feels more familiar; cosy even. Don’t get me wrong, Victoria has some rugged and remote places and its share of foreboding bushland and bleak emptiness. But there’s usually a bakery and decent coffee stop within a 50 kilometre radius or less. Which I’m sure you’ll agree is very important indeed. 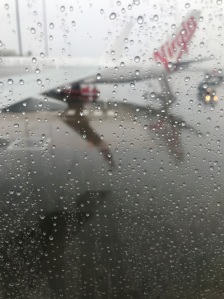 Landing at Tullamarine, Melbourne was grey and damp. It’s June, it’s Melbourne. I was about as surprised as I would be if the UK Conservative Party decided to dump everyone in the shit rather than get on with governing twice in the space of a year. The wind was strong, my crappy hire car was far from stable, but at least I was heading away from the clouds on the drive north to Bendigo.

Bendigo is almost the archetypal Victorian regional town. It’s a decent size so you can have your fair share of Harvey Norman and Maccas. But it’s also one of a string of towns born from the gold rush of the 1850s. This means there is a legacy of grace and charm, funded by glimmering rocks and transformed into ornate Victorian buildings, elegant parklands, and pompous statues. With a prominent effigy of Queen Victoria it could be the Daily Mail’s utopia, but I think that does an injustice to the fine people of Bendigo, and the fact that they at least have moved on from the 1800s.

I was here for work, but one of the advantages of having a work appointment in a cafe was the ready availability of cakeage. With an hour or so in between appointments, I walked a little bit off exploring the centre of town and parklands, discovering remnants of autumn, embellishments in iron and stone, and opulent fountains inducing the urgency to seek relief. I also came across a tower on a hill which, naturally, I had to climb for the view. With the rather prominent spire of the Catholic Cathedral punctuating the air and an array of functional buildings interspersed with green, I figured I could be in Exeter or something. Only without the knobbers. 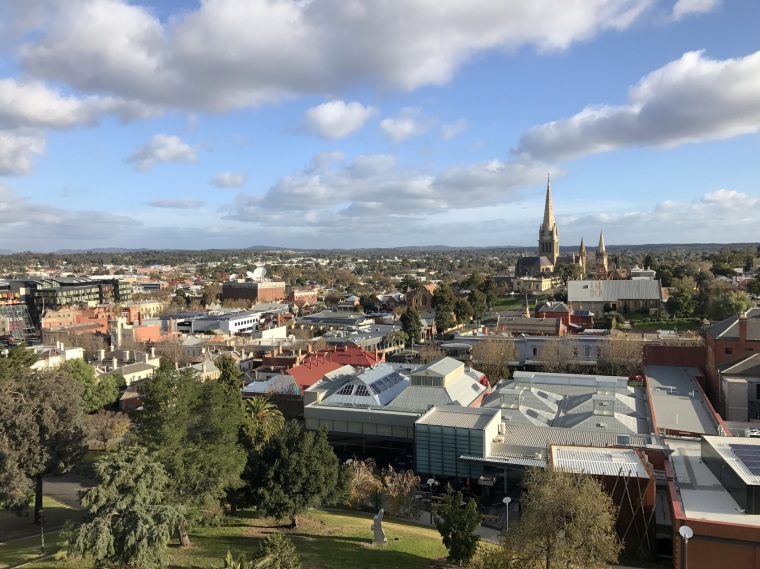 The next day I had the drive back to the airport to look forward to, squeezing in a decent breakfast and coffee courtesy of proximity to Melbourne. With a little time to spare, I returned via a network of country roads rather than the freeway, which was heavily populated with end of financial year traffic cones.

In keeping with recent reminisces from 2013, I paused briefly at the village of Maldon, which is somewhat cutesy and somewhat boasting an oversupply of antique shops and useless trinkets for a place of its size. It looks like the type of high street that should have a good bakery, but I didn’t really find one, so pushed on to Castlemaine, which had a bakery but this didn’t look particularly inspiring. Still, the coffee was getting even better as the number of kilometres from Melbourne decreased.

Veering off the main road to head up to the top of Mount Macedon, I paused in Woodend, which had a bakery that looked more the kind of thing I was after. I mean, it was called a bakehouse for goodness sake, which is something that every fine Victorian should celebrate. I purchased an overpriced wrap and inevitable caramel slice, one of which I ate rapidly at the top of the hill, the other gorged on the flight home.  The wrap fulfilled a functional purpose, the slice an emotional one. 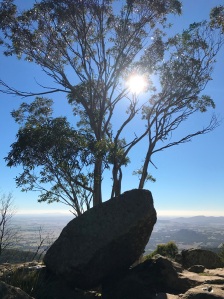 Anyway, such have been my ramblings in Victoria over the years I wasn’t actually sure if I had been to the top of Mount Macedon before. It turns out that I hadn’t, unless I really don’t remember the upward crawl into roads lined with ever more spindly and pathetic-looking gum trees, the view of expansive plains below and a giant golden cross constructed to appease the wrath of the almighty. 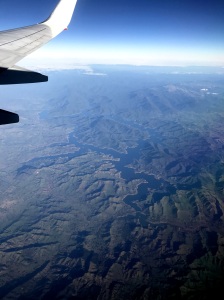 It was chilly up here, but I knew I was on my way back to Canberra so it wasn’t going to get any better. And for the second time in succession, my dawdling was beginning to make it touch and go that I would make my flight. Maybe I’ll learn, or maybe I’ll just nudge a little over the speed limit and swear at every idiot who dares to pull out at a roundabout and get in my way. It seems to work, and so this gold rush came to a successful frenetic end, antidote to the sedate charm of Victorian Victoria.

Brooding . . . . . #sky #storm #weather #clouds #thunder #landscape #canberra #visitcanberra #abcmyphoto #explore #outdoors #walk #rain #australia #summer #troppo #nature
Love is... The joy of becoming part of a wilderness on your doorstep. Hoping this beauty will recover, as it has done before. I wrote a blog post full of Namadgi memories, recent and past (gbpilgrim.com -link in profile) . . . . . #wilderness #landscape #views #nature #hiking #australia #bush #mountains #outdoors #explore #travel #canberra #namadgi #visitcanberra #sky #light #colours #bushfires
Survivors . . . . . #eucalyptus #australia #nature #wildlife #trees #outdoors #walk #explore #sky #actparks #colours #drought #bluesky #canberra #visitcanberra
Could use rain. Smoke in the background is from the Orroral Fire, which has now burnt through 850 square kilometres of Namadgi National Park, equating to around one third of the ACT. Most of the smoke visible this afternoon was a result of backburning operations, hopefully to safeguard Tidbinbilla Nature Reserve which is at the northern edge of the fire front. Rain is forecast over the next few days... bring it on! . . . . . #landscape #australia #drought #bushfires #canberra #countryside #nature #light #clouds #walk #outdoors #explore #visitcanberra #bushfiresaustralia #canon #colours #view #actparks #abcmyphoto
Who ever said Canberra was dull? At least the morons sent by the people of Australia to our home to supposedly run our country will get a taste of this in their throats tomorrow . . . . . #sunset #smoke #bushfires #canberra #lake #bridge #sky #colours #silhouette #reflection #visitcanberra #australia #abcmyphoto #abccanberra #bushfiresaustralia #drama #canberrafires #summerfromhell
Today’s scenes - Orroral Fire in Namadgi National Park taking hold . . . . . #bushfiresaustralia #canberra #australia #fires #smoke #orroralvalleyfire #summer #bush #abcmyphoto #abccanberra #emergency #views #nature #canon #endlesssummer #canberralocals
It ain’t over ‘til it’s over . . . . . #bushfiresaustralia #views #smoke #sunset #clouds #landscape #canberra #visitcanberra #australia #abcmyphoto #nature #outdoors #fire #light #evening #canon
The last two days spent clearing fences on Paul and Andrea’s farm has been a challenge. But also incredibly uplifting. On top of a hill in beautiful country near Batlow, everything bar their home was blackened as fire attacked from three sides. Their farmhand, Smiley, lost his hut and possessions, while the forest they use to produce eucalyptus oil is reduced to ash. One thing they haven’t lost is their generosity, humour and warmth. From Smiley sharing tales of giant fish caught in the dam to their experiences saving their home and each other on January 4th, they have welcomed us amateurs into their world with open arms. Fixing fences and building bridges. The highlight of today was being welcomed back to their home after pulling out our last fence post, sheltering from the blessed rain and being offered a cold beer along with a pack of eucalyptus oil and soap. The gift was lovely, a sign of their kindness, but chatting for half an hour like old friends at the end of the day was even better. Conversation and connection matters in times like these! They have really touched me and, as tough as things are, they are getting on with life as best they can. A positive from the fires they pointed out is that it cleared the land of all the invasive blackberries! And Smiley is gonna rebuild a hut where he can again dream of teaching a young dog some old tricks. 3.5km of warped and charred fence cleared. Tomorrow is another day, another place. Check out BlazeAid. . . . . . #community #countrylife #australia #bushfires #farm #nsw #batlow #snowyvalleys #blazeaid #bushfirerecovery #landscape #fires #volunteering #tumut #eucalyptus #hivis
Rain you say? . . . . . #australia #landscape #countryside #view #nature #outdoors #explore #roadtrip #drought #gundagai #visitnsw #summer #dry #farmlife