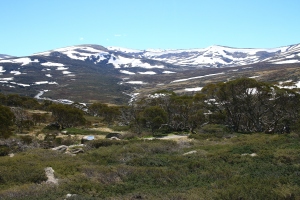 Because this is Australia the ingeniously named Snowy Mountains are not perennially snowy. However, at the end of November I was not expecting to see so many chunks of frozen icy slush dotting the mountaintops. The snow gave distinction to the ranges, visible just after a picnic in Cooma with Caroline and a potato masher. And moving closer and climbing in altitude, it was possible to walk on a splodge of icy snow at Charlotte Pass, from where more white stuff was visible along the Main Range.

I have walked from here to the top of Kosciuszko and back. But this was in past times when there was not so much to contend with along the trail. A short boardwalk through the snow gums with a view at the end was more fitting today, before turning round and heading back down to Jindabyne, by way of the famous Surge Tank.

Jindabyne has always proven to be a bit of a pass-through town on the way to the higher mountains. But staying here for two nights offered the chance to explore many of the highlights of the town, including its TWO shopping precincts! While these provide sufficient eating and coffee opportunities, the highlight of Jindabyne is undoubtedly the expansive lake on which it sits. Part Canada, part Lake District, part Australia, it’s a haven for boat owner people and fishy types. But don’t let that put you off…there are also charming parklands and meandering pathways fringing the shore. Benches and picnic tables offer frequent recovery. From here you can watch morning mists hovering over a dead calm mirror, or bask later on in the afternoon warmth. Or live out the end of the day with never-ending hummus and laser red light. 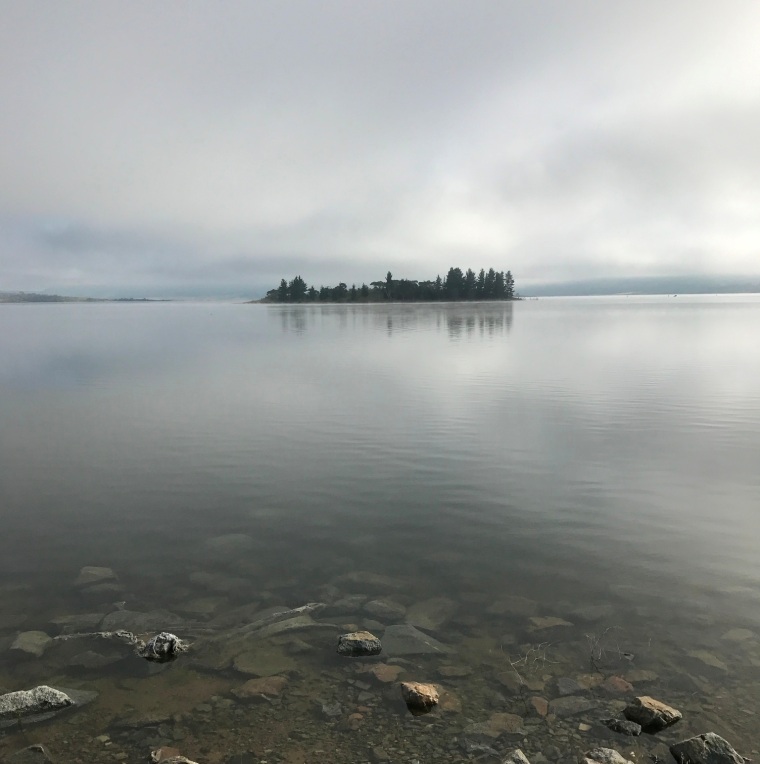 From Jindabyne the main road west narrows into the Thredbo Valley before topping out at Dead Horse Gap and plunging down towards Victoria. Thredbo itself is the closest thing Australia has to an alpine resort, nestled within the lower slopes of the steepening valley and generously adorned with A-Frame chalets and the promise of open fireplaces. In summer it seems to tick on over with a peppering of mountain bikers and day trippers. Many take the chairlift to Eagle’s Nest, either to plunge back down on two wheels or head to the top of Australia on two feet. We do neither, retreating from a strong and chilly wind for a ‘yummo’ hot chocolate.

We did however have a nice amble back down alongside the Thredbo River, walking to the soundtrack of rushing water and buzzing flies. The water here is lovely and clear and pristine and in some ways reminds me very much of Dartmoor. I think it was the sound of the water more than anything that evoked such a scene, rather than the flies and gum trees and baking hot sun at the end of November. 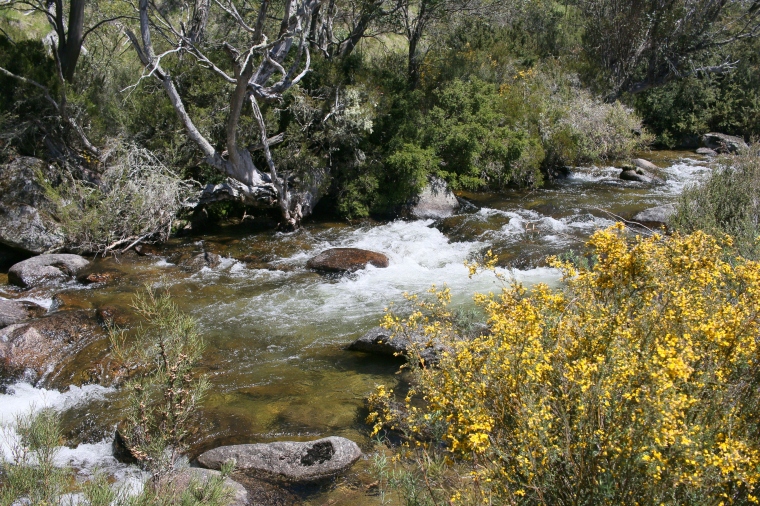 Leaving the high mountains we drove a somewhat convoluted route back to Canberra to provide maximum adventure. First up was a brief pause at Dalgety, a tiny place perched alongside the Snowy River that could have been the capital of Australia. And they say Canberra is quiet! There must be like ten houses, a few cows, and a million flies. But it’s kinda cute nonetheless. 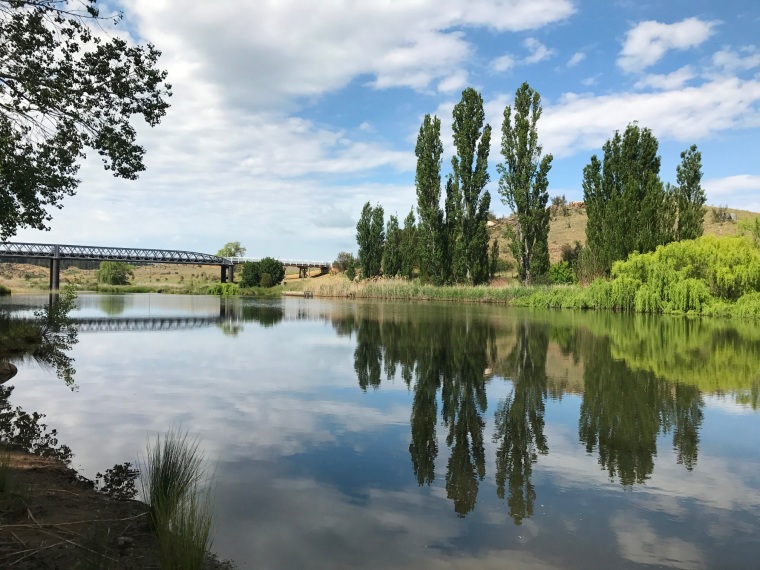 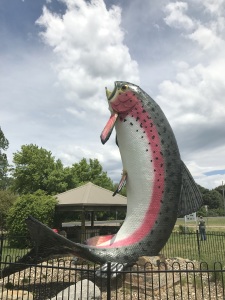 With the unforeseen temporary closure of the Snowy Hydro Visitor Centre in Cooma, a decision was made to proceed to Adaminaby for lunch instead. And what better way to lunch than next to a great big trout! This was indeed turning into a marvellous, sponteanous adventure and the best (or worst) was yet to come.

From Adaminaby the way back to Canberra is lonely, travelling a fair distance on dirt roads that are largely in decent shape, especially once crossing over the border into the affluent ACT. There are tiny signs pointing the way to the national capital and occasional homesteads in the midst of the bush. Bitumen returns somewhere in Namadgi National Park and there is a touch of relief, and the cherishing of smoothness. That is until a faint rattling develops into a shudder and a rumble and the front left tyre decides to give up on life. Wheel nuts are unmovable and phone reception is absent. What we need – in this scenario so typical of Neighbours when they go into the bush – are a couple of heroes with fluoro vests and a ute, with tools and an air of certainty that this, here today, is their fate. Not only to dislodge the wheel nuts but to do the whole service, to send us on our way back to civilisation with the minimum of fuss and no form of payment. This is what happens in Australia, and it makes me proud!