Warning: lots of oriental palace pictures looking almost exactly the same. It’s a similar phenomenon to being new to Europe and snapping away at every single church spire and stained glass window. Or migrating to Australia and taking a picture of a kangaroo every time you see one. Novelty and entrancement that only dwindles very incrementally. (In the case of the kangaroos ten years, and even then, the odd roo shot is not outside the realms of possibility).

Anyway, yadda yadda yadda. Palaces and temples. Seoul has a lot of them and as well as offering an insight into ancient South Korean culture and tradition they are housed within expansive grounds, providing contrast with the built up city environment bordering their perimeter. Enclaves of space and peace and gentle ornamentation, where the modern world disappears and you can find yourself all contemplative and meditative. And / or snap happy. 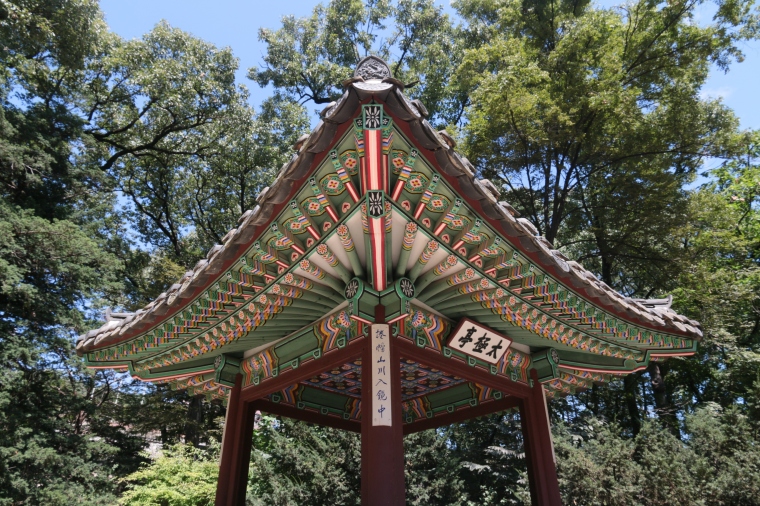 Changdeokgung and the Secret Garden

The first thing to note about Changdeokgung is that you can arrive early, buy a ticket for the Secret Garden English tour and realise you have some time to kill, thereby finding a coffee place that proves reassuringly good. With the first sip I could sense I was getting closer to Australia and this plus the caffeine infiltrating my body gave me quite the buzz.

So I was already in a strangely contented state entering Changdeokgung where I didn’t really read that the palace was originally built in 1405 and acted as Seoul’s principle palace from the 1590s to 1896. Instead, I was heading off towards various buildings, all seemingly interlinked with perimeter structures and interwoven courtyards. Apart from some of the enclosed spaces, you were pretty free to roam, enabling that random meandering which proves the best form of discovery. 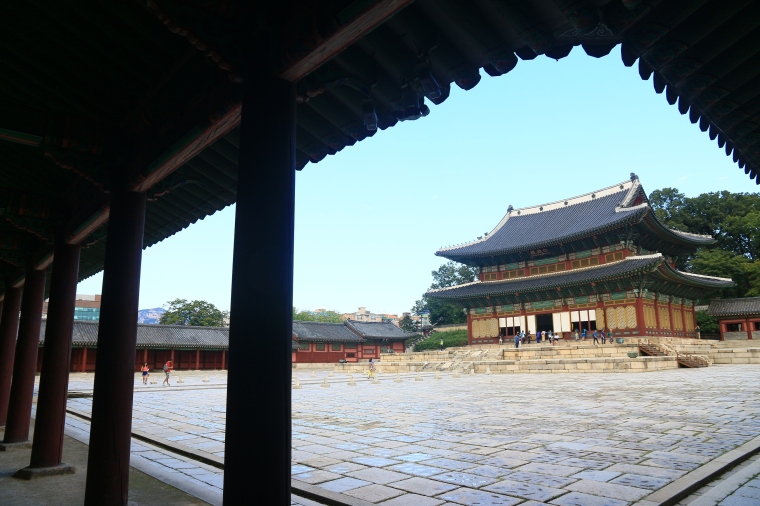 The purported highlight of Changdeokgung is the Biwon, or Secret Garden. What forward-thinking pioneering marketing by calling it a secret garden. I mean, how alluring does that sound to the 21st century Anglo traveller looking for some respite from the late summer heat of a busy Asian city? The fact that you could only access it by a tour in which numbers are controlled (admittedly to a not-so-serene one hundred) can only add to that appeal.

Well, the Secret Garden was certainly agreeable, all lily ponds and curvy-roofed wooden structures, circling pathways and blissfully shady trees. I suspect it would be stupendous in the full burst of autumn and without one hundred other sightseers becoming progressively weary and disinterested as they are shepherded from one ornate compound to the next. I think the best way to appreciate the secret garden would be if you were employed as a gardener. What fabulous picnic lunch breaks there would be on the cards, and some supremely pretty sheds for your tools. Plus good coffee down the road once the horde of foreign zombies descend at two hour intervals.

On the western flank of Changdeokgung is Bukchon Hanok Village, an area of traditional Korean housing now a little bit touristified. Nestled amongst hilly terrain there remains a sufficient network of maze-like lanes to get completely lost and stumble upon a spot that you had previously walked past. Possibly. The dwellings are single storey and – for the most part – look small, though I suspect some of this is an optical illusion and beyond those walls the interior opens out tardis-like into light and airy rooms and hidden verdant courtyards.

On the busier strips – one ascending lane in particular seemed to be significantly more popular than the others – locals patrol with signs invoking the masses to “Please talk quietly”. It’s a reminder that this is just a regular neighbourhood with regular Joes trying to get on with their regular lives. I observe no noticeable hush, and can only deduce that the more expensive properties would be away from this major thoroughfare. But the view at the top is why so many tread this way. Looking towards the CBD and North Seoul Tower, it’s the classic juxtaposition of old and new, emblematic of this city as a whole.

Moving further east from Bukchon, it doesn’t take long before another royal palace comes into view. Gyeongbokgung ticks similar boxes – aesthetically at least – to Changdeokgung so I decide to keep my Wan in my wallet and have a cursory look around outside of the barriers. If anything, the site appears more imposing, with the main entrance gate at the northern end of a long thoroughfare adorned with statues and memorials. There is a greater sense of power and status here, brought to life by the presence of ceremonial guards in traditional costume. Guards which you can find in greater profusion by following the thoroughfare south…

The palace at Deoksugung may look similar to the others. I have no idea, because I never really ventured beyond its exterior walls. The main attraction here is a changing of the guard ceremony with more men in colourful costumes and garnished with stick-on facial hair. Sure, it feels like a bit of a show for visitors but – heck – I’m a visitor and expect some easily accessible semblance of traditional Korean culture, right!

I thought I may be late for the ceremony and while there was something stirring by time I arrived, I was pleased to find a space near the front. Only as the show progressed did I understand why I had secured such a premium position. Oh, that’s a big drum in front of me is it? Oh, that hastily shouted Korean was a plea to cover your ears. Oh. Ouch. 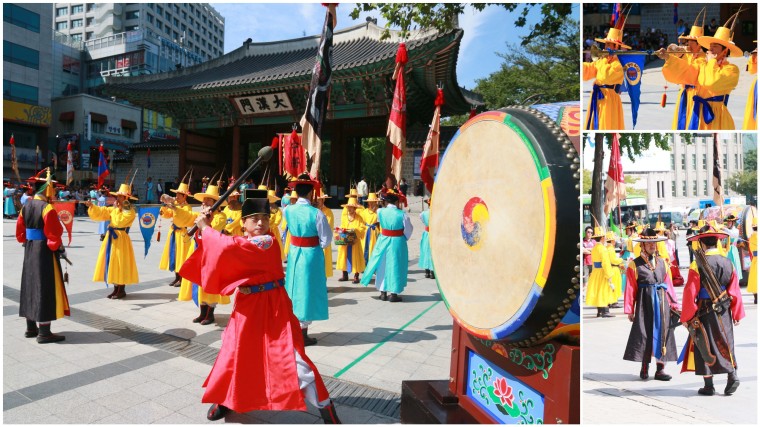 As well as the abundance of stick-on facial hair it was funny to see this taking place in front of a Dunkin Donuts. There were also a couple of pauses in proceedings for people to come up to the guards and pose for selfies. And when it seemed like all was over, there was the sight of the ceremony heading across to City Square but – before doing so – waiting patiently at the traffic lights for the green man. For me, this was the perfect encapsulation of that inescapable (and overused term of) juxtaposition. A country moving rapidly into the 21st century while trying to hang on to its traditions. Here, progress and reverence in at least some kind of harmony. 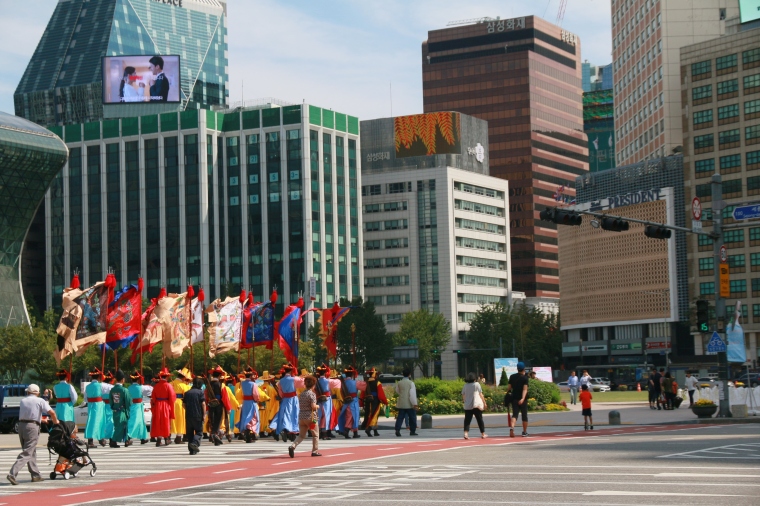