Well, it is quite something to be thrown back into the thick of it, and quite something again to be thrown into the thick of it in the thick of it. With a hop, skip and considerable jump there could be no pretence of being in England anymore. No tranquil ponds and croquet-worthy lawns, no afternoon teas and broadleaved avenues, no ubiquitous sarcasm and cling-filmed sandwiches. Just right bloody ripper sunbaked Straya with Utes and flies and glad-wrapped beetroot sangas and drongos in high-vis and Aboriginals under trees, with rarely a hipster in sight.

That probably does Alice Springs an injustice to be fair. While there are plenty of Utes and flies and a fair share of drongos, it struck me what a right multicultural melee Alice is. An African taxi driver took me to my resort hotel, filled with – among others – softly-spoken British baby boomer couples and their lairy transatlantic cousins. Here an immaculate receptionist of Southeast Asian heritage checked me in and I passed what passed for a chambermaid from the Middle East. Later, on the way into town for a bite to eat (friendly Asian service again), I strolled along Todd Street Mall to the sounds of German and French backpacker accents and something more rarely heard in other Australian towns and cities: Aboriginal dialects, which are many and varied. For better or worse, it really is a right little melting pot in the middle of nowhere.

There is an oasis town aura to Alice – albeit a little rough around the edges – which perhaps draws these people in. Approaching from north, south, east or west it is probably the first place with a Woolworths and Kmart for a thousand miles, or something stupidly noteworthy like that. You can finally get a cappuccino, but do beware. And there are public showers so you can attempt to wrench off layers of sand and dirt and flies that have attached to your skin while ploughing through the Oodnadatta Track in your big fuck off truck. Frankly, if only more towns in Australia had such facilities, it would have been most welcome.

On the other hand, natural oases appear more limited. The Todd River is mostly a river in name only. Usually it’s just a dry, wide, and sunken swathe of sand meandering through town, almost as if a dreamtime serpent had once there slivered. It is quite striking and also quite beautiful in a way: grasses and short and stocky shrubs flower along its banks and a parade of River Red Gums indulge in a majestic arrangement of bulbous roots, variegated bark and twisted, stretching branches. There really is not a better Eucalypt in all of Australia, in my uneducated opinion. It just looks like it belongs here. 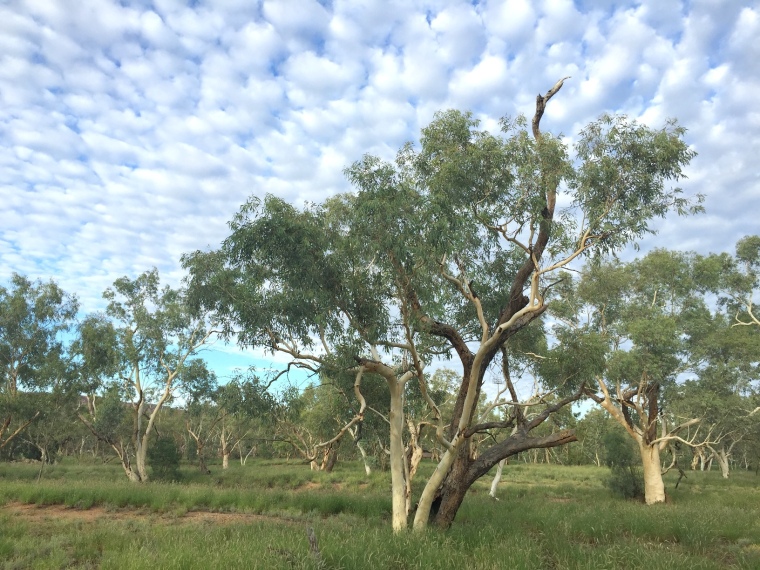 As well as dry (semi-arid is the tour guide word of choice) Alice is – it will come as no surprise – frequently hot. However, having endured a scorcher of a week in Canberra, it actually felt quite pleasantly temperate for my stay. A nice ambient thirty degrees with a bit of a breeze and occasional cloud cover. Pah, call this hot?

Anyway, venturing into the outback from Alice – once work duties have been completed – it doesn’t take long to feel a long, long way from anywhere and anything. You can sense it would be really, really nasty on a proper hot day. Flies would multiply tenfold, crickets would pulsate loudly before passing out, the cracked earth would literally bake a goanna, while giant birds would circle for unsuspecting Englishmen lost in their quest to find a tea shop.

Fortunately, this particular Englishman was on a minibus tour today, taking in the West Macdonnell Ranges. Not the entire length of the ranges mind, because they stretch virtually uninterrupted for something like five hundred kilometres. Technically there are three separate ranges in the ranges, if that makes sense. Named after British conquistadors who got a bit lost, I suspect. I cannot remember, because instead of taking in everything the tour guide was saying, I was kind of mesmerised by the almost repetitive pattern of sweeping ridges rising from scrubby red plains.

Scenery passing by the window, I noticed how once every few kilometres the ridgeline dips and is eroded to varying degrees. In some spots this has created a significant gap and a way through to the north, sometimes narrower than an American tourist. This is where waterholes and gorges form – Simpsons Gap, Standley Chasm, Ellery’s Big Hole and the like – providing opportune stops for purveyors of sightseeing day tours. They are stops worth making, for there is an air of magnificent serenity in such sheltered grandeur.

Further down the road there are some ochre pits, imaginatively marked on the map as ‘Ochre Pits’ (it is a rare thing indeed to find any ambiguity whatsoever in modern Australian place names). The pits offer evidence of mining long before unscrupulous Queenslanders and Chinese corporations arrived. I never realised how rare ochre was, this being one of only nine such pits in Australia. Quite coincidentally I had been to one other, down in the Flinders Ranges, a couple of years ago. And I remember just as many flies there as there were here today.

Beyond noon and the sun was starting to become a little fiercer and, of course, the flies had been stoked into action. Time for a cold beer and a feed I would say. And quite astonishingly there is a place just for that. At Glen Helen Gorge – which really does appear in the middle of nowhere – someone has decided to build a resort. It’s not your resort in the Abu Dhabi or Port Douglas sense – think more shack-like and rubble-strewn. But it has a pub, a pub with cold beer, along with a plethora of touring essentials like fly nets and trail guides and fridge magnets. And just down from the pub you can stagger down to the next waterhole. 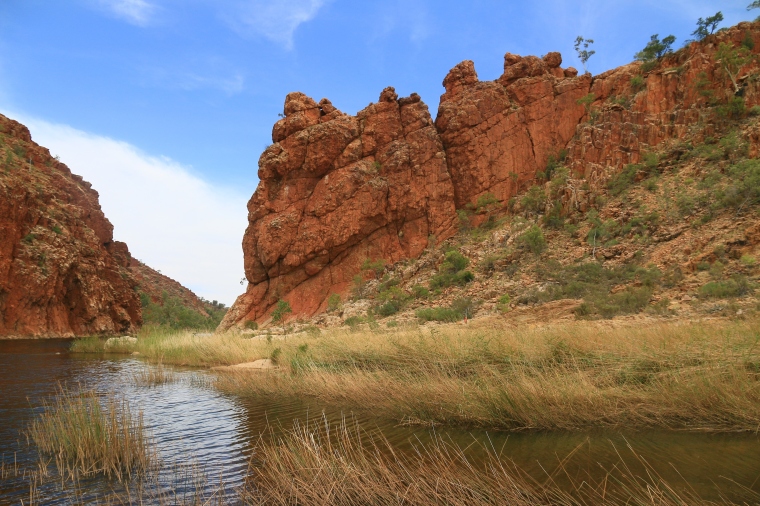 Refreshed, you may like to take a post-lunch dip and float on the waters that have collected in the hollows of Ormiston Gorge, ten minutes or so up a side road from Glen Helen. Or, like me and several others, you may wish to feel the full force of the early afternoon sun on a short but steady climb to an overlook. Perhaps it is the sweat from collective hordes of visitors that gathers in the open air swimming pool several hundred feet below?

Still, it is all worthwhile toil, for the view is pure red heart of Australia stuff. With trails and river beds and curiosity beckoning on every rocky ridge top, you can begin to see why Aboriginal tribes were prone to wander. For food and water for sure, but there is also something captivating and enticing about this landscape which is hard to describe. It wants to lure you in, to see what is around the next corner, and, in doing so, to fool you into a frazzled state of bewilderment and possible death because you are not part of it.

Thankfully, an air-conditioned minibus was enough to tempt me away from disappearing into a chasm, but I have made a mental note of the Larapinta Trail – or parts thereof – for future reference.

The pleasingly cool bus happily commenced its return to Alice with another waterhole stop – where you could invariably change into swimmers, bathers, togs, swimsuits or just go stark bollock naked – to come. And then, what will later be re-created as an episode of pure outback horror for some, commenced. A puncture, hordes of flies, hot afternoon sun, circling vultures, probable snakes, likely serial killers. Would we make it back in time for our dinner reservations? What about our flights tomorrow? What if we get eaten by kangaroo zombies? Anyone want any lamingtons? AGGGHHHHHH, lamingtons, help!!

Mercifully, the tyre got changed, with just a little help from yours truly. Being the only male of a certain age on the bus I felt obliged. And a touch heroic, vanquishing the oily grime from my hands with a wet wipe from someone’s handbag. What. A. Man. We still might make the waterhole stop now, and not have to eat lamingtons to survive. Unless we get another puncture, but what are the chances of that?!

And so, ten minutes later with a flat front right, someone opened the lamingtons while others flagged down help to get a message back to Alice for another bus to be despatched. Certain overseas visitors couldn’t fathom that there was no mobile reception here, and it was not as simple as getting a rescue helicopter so they could still make it in time for their dinner reservation. One hour in, an extended family resorted to playing the ABC game and I desperately hoped they would ask me to join in. Two hours, and restlessness heightened. People needed to pee in the bushes and generally say what they would have done differently with the eternal benefit of hindsight and no experience whatsoever travelling in the Australian outback. A man with binoculars scanned the road on the horizon, each occasional sighting of a vehicle bringing brief hope before its despair.

Two and a half hours in, one more vehicle sighting provided another glimmer of hope. With sunlight dipping, the time when kangaroo zombies stir from the caves was nearing. I had resisted the lamingtons thus far and wanted to keep it that way. The vehicle slowed and revealed itself to be an identical minibus, apart from some livery telling us it’s the airport shuttle. Jeez, that’s some transfer, so let us hope it’s for us.

And of course it was, for this isn’t really an outback horror tale at all, just some inconvenient episode that soured a fine day but will find use in a vacation anecdote (or maybe even an inane post on an obscure blog). It may have already appeared on Trip Advisor, thanks to the ruining of dinner reservations. And of course, it’s just another reminder that you’re back in Australia Neil, the real ‘Straya. And there aint a lot you can do about anything in the real ‘Straya, so suck it up, maaaate!