So it turns out ‘The North’ is more than just a fictional imagining in George R.R. Martin’s gargantuan head. There is a real place in which gruff folk with grizzled beards mumble about stone walls. The weather can be cold, but it is mostly just bone-chillingly wet; sombrely leaden. Expansive wilds present a bleak, gritty beauty, tamed only in picturesque patches of lowland. Sheep cling forlornly to the slopes, anticipating, finally, the coming of winter. Further North, an ancient wall struggles to keep out wildlings, armed with Tennants Super on the 0900 to Euston. We are in Cumbria.

Cumbria before the floods, but only just. After a soggy few days on the Lancashire coast, it wasn’t much of a surprise to travel up the M6 in a medley of drizzle, dark cloud, and downpour. While a brief period where I didn’t have to use windscreen wipers offered hope, this was dashed with unending persistence once in the Lake District National Park. And so, from umbrella buying in Bowness to umbrella usage in Ambleside to umbrella drying off in a neat hotel in the middle of nowhere, there really wasn’t much to do in this greatest of outdoors.

As the dim skies faded black and the patter of rain continued apace upon the skylight I decided to make a break for it and check out the bright, Christmas lights of Keswick. I was hoping for a Dickensian scene of late night shopping, market stalls with hubbub and mulled wine, brass bands blaring out Once in Royal David’s City, and ribbons of light twinkling above curving cobbled alleyways. The reality offered some lights but little else, as the town appeared to be hunkering down for the night. With sodden shoes and a reduced-price pork pie from the Co-op, I retreated back to the car, umbrella decimated by a gust of wind, facing only the promise of driving through surface water in the dark. I made it, but Keswick did not. Two days later it was flooded.

Oh for a dry day and, for most of Friday, it happened. It wasn’t exactly bright or pleasant, but for a few hours the rain had paused before it was to come back in such vengeance. A few puddles dotted the road alongside Derwentwater on the way towards Honister Pass. Softened valley villages and stonewalled farms yielded to barren upland, coated a deep brown with the dying bracken. A steep decline worthy of the Tour De France returned things to something closer to the idyllic around the idyllic sounding Buttermere. 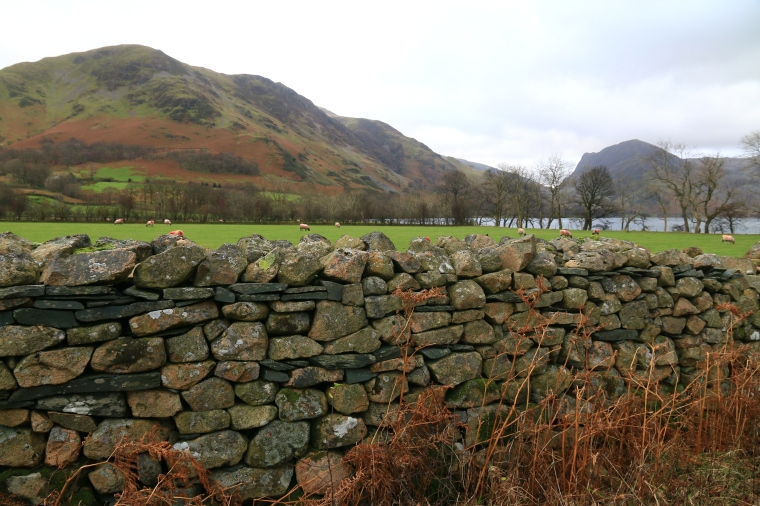 This was my chance to revel in dreary dryness, to soak up bleak melancholy, to wander lonely as a big grey cloud. The lake could be circumnavigated and it came as something of a surprise that the path was still in good condition during the two hour loop. Only once was a rocky detour required due to a swollen lake edge. Oh, and a couple of steps through a rising brook. Hang on…I almost forgot…that falling ass over tit moment on a small stretch of grass linking the road back to the path. Muddy bottom, muddy camera, but thankfully no-one around to see my slippery fall from grace. 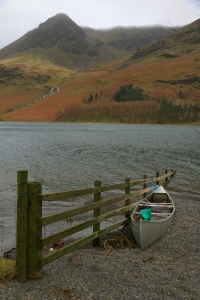 The scenery was undeniably beautiful. One wonders whether it would be improved by sunlight and fluffy white clouds, buttercups and warmth. Probably. I remember it as such on a brief stop ten years past. Today, it was moody and, to be honest, me too. After a week without it, I just really really REALLY craved the sun. But at least it was dry…so mustn’t grumble. 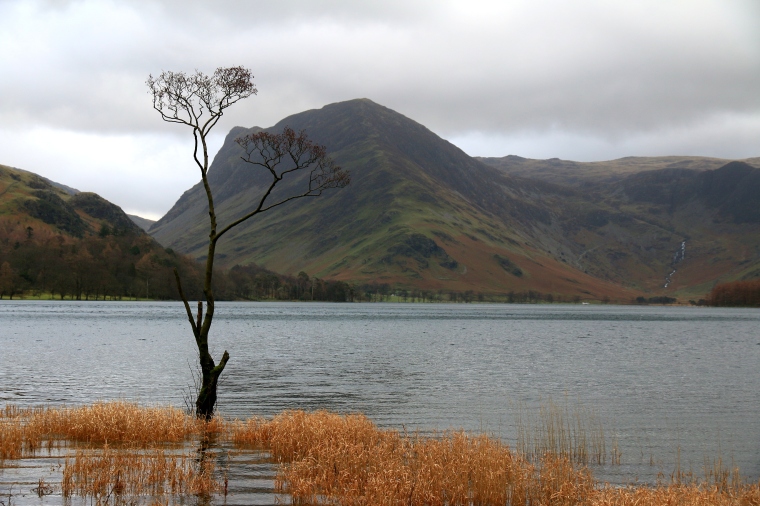 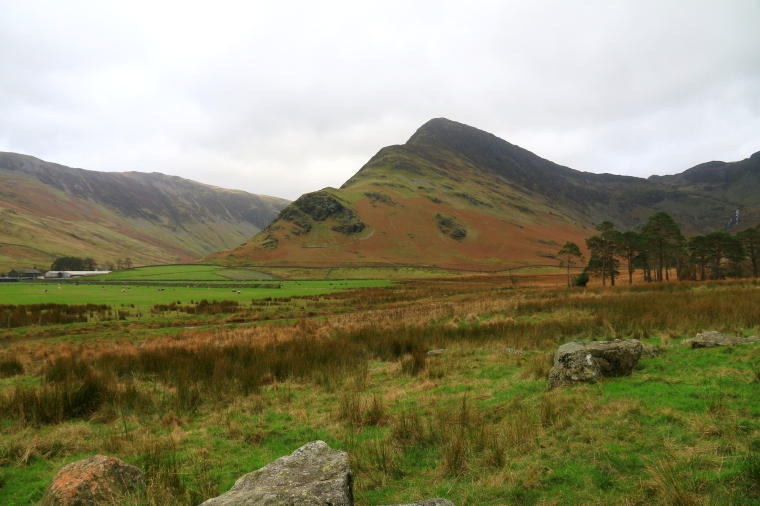 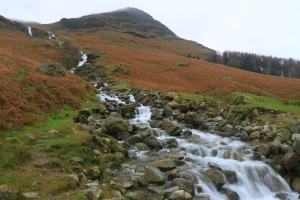 With all the previous day’s rain it was no major surprise to encounter a series of stretched out cascades and falls plunging down the steep-sided fells towards the lake. I suppose this is some recompense for the deluge, but so frequent and incessant is the sound of water that it makes you want to pee really really badly. And there is not much in the way of foliage left to offer shelter and protection.

Still, relieved and closer to the end, an alien sliver of blue sky opened up to the northeast. A chink in the steel armour, it was something to cling to, something to chase. Briefly it illuminated some hills in the distance, but failed to deliver anything of solace on my face. There would be little chance for anything to air for long.

Completing the Buttermere circumnavigation, I jumped back into the car to venture over a narrow pass and down to the western edge of Derwentwater. That chink of blue sky was somewhere in this direction, and I may have bathed in it for all of twenty seconds. Unfortunately I was in the car at the time, but it was still a very special twenty seconds. A valley glowed. A farm building shimmered. The sheep murmured quiet contentment. And then the strong wind sent it away, off into the distance.

Early afternoon in Keswick and things had actually dried out a little – perhaps it too had been briefly kissed by the sun? There were people on its streets and a hint of something Christmas-related in the air. There was no wafting smell of hot pork pie though, but then I began to question whether this ten year old recollection was actually in Kendall rather than Keswick? So, of all things, I ended up with a Cornish pasty in the cute town square.

Determined not to suffer a food disappointment to compound my rapidly redeveloping British glumness, I set out on a mission for afternoon tea. For what else is the Lake District if not the archetypal biscuit tin setting for afternoon tea? Grasmere sounds a likely spot, full of tea shoppes and crafty gifts to cater for poetic dreamers. A place where a pot of tea can – at a single moment – feel like the best thing in the world. Elation amplified by a gigantic slice of treacle tart, sickeningly delectable. A high on which to leave the lakes and to treasure a day of figurative sunshine amongst the December clouds.