A few weeks back I ventured bravely into the unknown, leaving the comforting bosom of Devon and Cornwall and stepping east into Dorset. At first, there was nothing of great alarm, trundling through sunny places with names like Littleknockers Botherscombleyton and Purdleywetherall Nincompoop. The quite dully named Dorchester still had a Tesco and it also had my Dad, who had mastered this particular rendezvous and whizzed us briskly onwards to West Lulworth.

If anywhere was going to remind me of GCSE Geography – apart from a teacher attired in 70s Cornish tramp style – this was it. Limestones, clays, chalk and sands…a concordant coastline of multifarious erosion (thanks for the reminder Wikipedia). But you don’t need to know your geology to appreciate such sights, on this most glorious of September days. 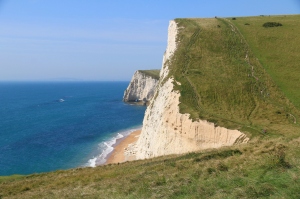 You may, however, need a decent pair of lungs and a sturdy set of hamstrings. Depending on distance, exploring this coastline is at best lumpy and at worst near vertical. I have an inkling this may be down to different rocks and things and their resistance to erosion and stuff. The current batch of Geography students at the top of the first hill might be able to tell me. But no time for stopping, for the first amazing sight is down the hill.

With a name like Durdle Door it could only be in Dorset. A headland (which has, again, multifariously resisted erosion) pokes out into the beautiful blue green water, which harbours shimmering sandy coves. It seems someone forgot to shut the door on this feature, because there is a big hole where it should be. Born in a barn, as they probably say here as well (to which the answer is, unequivocally, yes).

It doesn’t jump out at me and say: “India”. I haven’t been to India but it’s not what I picture from the clichés and stereotypes milling about my brain. Still, someone decided it was a good spot for a Bollywood movie. From above the beach (which was closed for filming) it seems this particular movie was about a bunch of young lasses and fellas having a right hoot playing football on the sand (surely it should be cricket, no?). There was some music and perhaps there was some dancing, as we turned onwards and most definitely upwards.

The good thing about this particular climb was the ever expanding backdrop, necessitating natural rest breaks for photos and selfies and simply having a breather and taking it all in. Occasional wafts of lively Bollywood music spurred you on to the top (arguably, to get away from it!) and you reached there and thought…well that wasn’t so bad after all.

But still, the trail (which is, I hasten to add, the oft venerated South West Coast Path) undulates. Another climb, another gargantuan row of white chalk cliffs and shingle beach colouring the sea azure. A long stretch, less steep but grinding, gnawing, nagging, starting to get a little annoying. The air is warm, the fields bare, the reflection from the ocean blinding. It is amazing, but I am being English and naturally starting to complain. Not out loud, but in my legs and in my head. A tiger roll and slabs of cheddar help as does the astonishing view. Looking back from whence we came, the highs and lows, crevices and coves, the jumbled tangle of concordant coastline which plunges and slides into the English Channel.

Turn the other way, and you can see that it does all come to an end. The cultivated rolling pasture of a Hardy novel reclaims the land, and villages like Corlookatthat Honeytemple wallow in the valleys of rampant conservatism. The endless sands of Weymouth look welcoming and – at least from here – Portland appears as some magical, mystical isle rising up out of the sea (spoiler alert: it’s not).

The route back from here departs from the cliff line and mercifully involves fewer lumps and bumps, skirting the edges of great bowl-shaped valleys and the occasional patch of gorse. It is infinitely less interesting, but does the job with a minimum of fuss. Occasional views north show hilltops and ridges many miles away, while patches of pastoral begin to return underfoot. It be no Devon but it aint a bad go.

In fact, despite similar voluptuousness, it seems drier than Devon and thus a little harsher on the eye. Perhaps top of year A Level Geography students would tell you it’s due to the geology of the place and the climate. Others will say it’s just a nice sunny day which is great for the harvest and even better for ice cream. Ah, an ice cream at Lulworth Cove. This may well have been something I was daydreaming about on a plastic chair back in an austere converted military hospital in Devonport in the 1990s. It took a long time coming, a spot of bravery, but it was worth the wait.