I am behind, seriously behind. Numerous distractions scattered within a 30 mile radius of Plymouth have conspired to infiltrate the memory card of my camera and ingratiate the memory banks of my brain. Blogging was so much easier when I was marooned in Canberra, with just the occasional escape to regurgitate and local tree pictures to upload. Today I forget what day of the week it was yesterday and where I popped out in the afternoon after labouring in front of my computer doing work (eeek).

So, in an effort to catch up to the present day, here is the first of a non-sequential, scattergun melee of words and pictures. To provide some semblance of logic, the focus is on Southeast Cornwall and various trips I have made across the Tamar to this somewhat understated of back yards. It’s an area that can get overlooked – in fact I have been guilty of such – for the drama and mystique of the North Cornish coast. But there are many gems, some of them new to me, littered within the rolling fields and crystal coves of the south.

Literally just across the Tamar are the twin villages of Cawsand and Kingsand. It’s a small pedestrian ferry ride away from the salty sewage and sinister seagulls of Plymouth’s Barbican. Despite the influx of Janners, it is undeniably charming courtesy of its narrow streets and pastel ocean tones. Stick around as a sunny Sunday afternoon lengthens, and you can gleefully soak in the mellow vibes with a Doom Bar outside the front of the Devonport Inn. 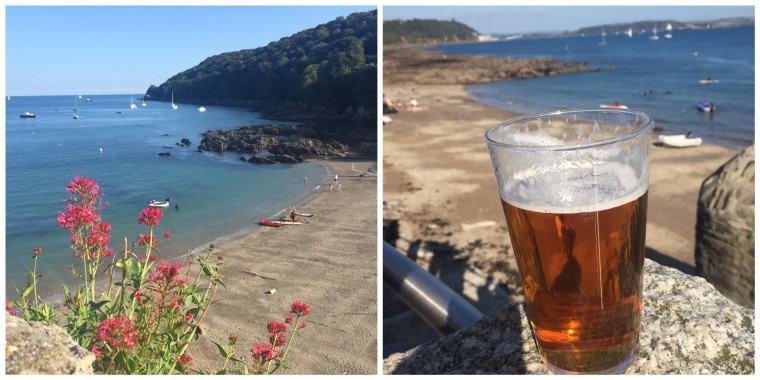 Around the corner from here is Whitsand Bay. An area that I frequently bypass in pursuit of those finer grains of sand. Come at high tide and there will be little of it to walk on. But when the tide is out, the bay stretches on and on and on. The ribbon of road skirting the cliff tops bears a passing resemblance to a small section of Great Ocean Road, and steep tracks lead down to the sands and rocks and pools far below. Not so bad to reach, but harder to return.

There is a great sense of space here – of vast ocean and big sky, Plymouth hidden by the hulking spine of Maker Heights and Rame Head. Small fibro shacks with names like Eddystone View and Shipwreck Haven add a rough and ready, ends of the earth, windswept aura. It could be coastal Tasmania, Devonport around the corner and Launceston up the road.

Along from Whitsand Bay the trappings of modernity return at Looe, a place of many a childhood day. There is nothing overly special about Looe – it’s just your regular run-of-the-mill southern Cornish fishing port nestled into a steep valley. Peppered with fish and chips and amusements it is a resort town, though not of the same ilk as Skegness or St Tropez. Two prime assets are its leafy branch rail line linked with Liskeard and Sarah’s Pasty Shop. Both in the same day make it worth an afternoon.

Many of the emmets and grockles and – indeed – locals combine a trip to Looe with a stop in Polperro. Polperro is undoubtedly the prettier of the two, with narrow (mostly car-free) streets, cosier cottages, and a ruggedly fishy pungency. Pasties look no more than average, but the recent revival in crumbly fudge (as opposed to the bland, processed slabs packed in Huddersfield) has blessed the town with a new outlet to be commended. Cornish sea salt is the fitting and fulfilling way to go.

From here I am going to skip a huge section of the coastline and return to it in a jiffy. Mainly because I want to build this post up towards a marvellous, heady climax. So, shifting further west, if I was to pick a line between Mevagissey and Falmouth I would be marking unchartered territory. It excites me that I still have unchartered territory in this part of the world. I made a small incursion into it the day after returning from London and it confirmed that if I was ever to move back to the UK it would not be in London (but never say never right?!).

Gorran Haven is, I suppose, nothing remarkable and its town beach would disappear with a high tide. But it offers a less touristified alternative to nearby Mevagissey, possessing enough steep narrow streets and cobbled harbour walkways to keep seaside amblers happy. I think it’s the kind of place where everyone knows everyone and their business, which is no doubt discussed in lurid detail at the local RNLI supporters group meeting every third Tuesday of the month following the gathering of the Retired St Austell Druids and Mystic Circle Society. But I think I might like that. Its fish and chips and fairly remote and secret sandy beach around the headland might also make it bearable.

But if we are looking for blissful sandy beaches in azure seas there is a gem amongst gems, a golden crown gleaming through the rubies and pearls of Southeast Cornwall. I had not set my eyes on it until a month or so ago, benign and more subdued under cloudy skies. A sunny day in early September gave me inspiration to return.

Eschewing another day of winding lanes and tractor blockages, I took the train for a change, disembarking at Par for a bus to Fowey. Fowey is kind of like Looe and Polperro, being yet another steep harbour lined with pastel cottages and granite townhouses. I like it the most out of the lot of them, maybe because it is a bit more upper class when I am not. I could live here but doubt if I could afford it. You can tell it’s on the Islington radar, with a beautiful bakery and organic butcher and delicatessen and many a cosy cafe to wait for a water taxi to take you to your yacht. I think this might help explain why I think I could live here. 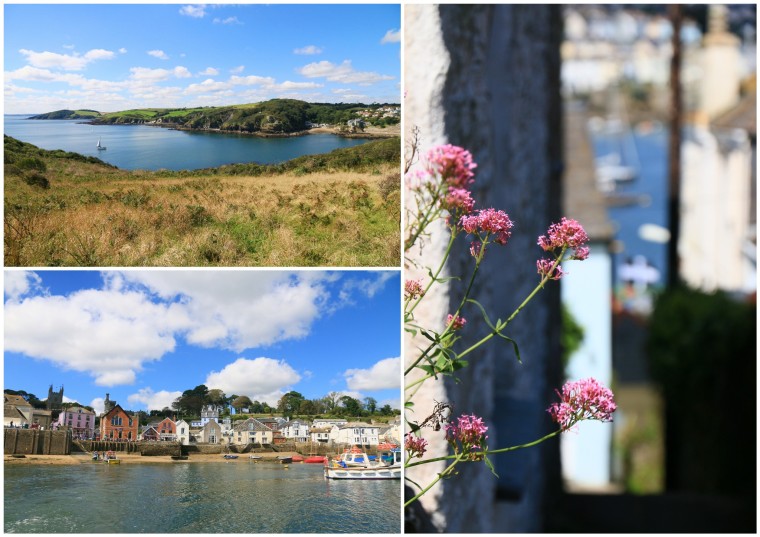 I could just as equally live in Polruan, across the river from Fowey and gateway to another luscious corner of cotton wool clouds hovering over creamy fields spilling into the sea.  No fancy bakery, no organic quinoa, just good old fashioned St Austell Ales and the sound of circular saws emanating from the boatyard. A steep, steep hill laden with bunting, or a slightly less severe meander lead to St Saviour’s headland, and expansive views south, east and west. 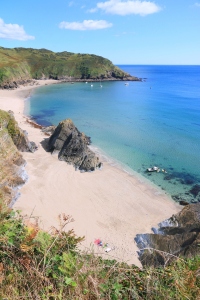 Back in classic South West Coast Path territory, the trail dips and rises steeply once again, the glare from a becalmed sea radiating heat like the sun through a windscreen. Turn a corner and you cross over into the Mediterranean, as the horseshoe cove of Lantic Bay welcomes the weary. Islington-on-sea may have anchored down below, but the ultimate satisfaction is to arrive on foot, rewarded for effort beyond expectation. I cannot think of a better place to eat some of my provisions from that bakery and delicatessen, marvelled by the colours from on high.

A jewel for the keeping.