The eternal battle between Devon and Cornwall hinges on the correct approach to bedeck a scone. Cream then jam, jam then cream? Does it really matter when both are so god damn delicious? Well, clearly the answer is yes and, clearly, Cornwall wins.

It may seem a trifling matter, but the fight for sconepremacy reflects something far deeper in the southwest psyche. That is, which is the better county? Unlike the scone debate, this question cannot be so easily resolved. In my mind at least it is on a par with assessing the merits of England and Australia and as complex as Tony Blair being the logical person you’d hire to bring about peace in the Middle East. And you know what, I think the answer to this conundrum may be to appreciate each as equals, and revel in the fact that they are both pretty good anyway, particularly as scones are plentiful in whichever county.

For balance only the leftist BBC conspirators could dream of, let me now present some recent evidence for the case of Devon (given my last entry was Cornish). Specifically, the southern and western part of Devon within reasonable proximity to Plymouth. The other stuff doesn’t really matter, mostly because the pong from Exeter ruins it. And this is the stuff that is close to home.

Hellmans and Simon despair, for Noss Mayo is the winner and may well take out loveliest village in Devon competition. Just a short run out from Plymouth via a maze of ten foot hedgerows, it’s a place of peace and serenity and that colourful bunting that is just about in every village in the southwest. Cottages with names like Anchor’s Rest and Primrose Lodge scatter haphazardly down to the water, while home grown asparagus sits next to an honesty box and a bowl of water for passing dogs.

An additional perk of Noss Mayo is the perfectly blended walk of seaside cliffs, creamy pastures, flourishing woods and boat-a-bobbing creek. A loop walk that can – should you wish – be completed at a relaxed, ambling pace. Just watch out for frenetic foreigners high on sunshine and the scent of silage.

Oh, and did I mention there’s a pub? I probably have, several times in the past. It’s positioned perfectly towards the end of that walk, at the heart of the village, jutting out into the water (or…at low tide, the slightly less idyllic mud). The pub is arguably the jewel in the crown of Noss Mayo and I can now recommend the fish and chips as well as the selection of ales. Experience suggests this may not assist the final climb back up to the car, but it will likely have you coming back for more.

A nice set of hams:

Outside of Noss, there could well be many other contenders for Devon’s loveliest village yet to be discovered. It’s a fair bet that a bulk of these will also be in the South Hams, the luscious, rolling countryside tumbling down from the moors and into the glittering ocean. Various rivers cut their course through the hills, passing thatched roofs and church spires on their way out into the sea, itself fringed with shallow sandbanks and undulating dunes. 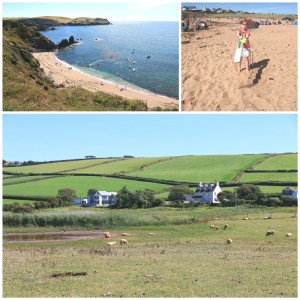 Of course, the weather cannot always be relied upon to generate the picture postcard that I have so feebly conveyed. And when the sun does shine in summer, the village of Modbury can transform into a car park. Beaches such as South Milton Sands become busily popular, but there is enough room to play cricket and tentatively wade into the inviting but tepid ocean. Escaping humanity remains a possibility, with the ever glorious southwest coast path providing hope to reach Hope. Meanwhile, the increasing proximity to Salcombe means that the ice cream from its dairy becomes commonplace. 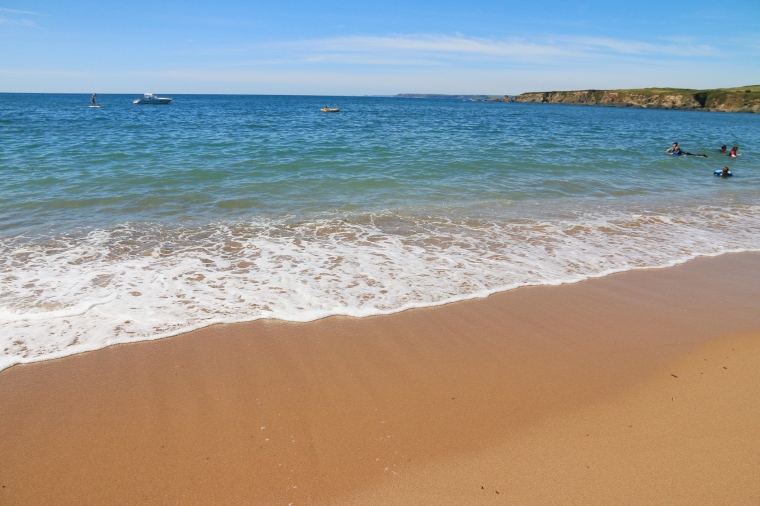 The loveliest village could actually lie along the stretch of road between Kingsbridge and Dartmouth in the South Hams. The problem is that it is difficult to assess, since negotiating each village by car requires a shot in the dark, following by a wait and a reverse, and a punt around the next corner before a tractor bears down on you followed by an unfeasible double decker bus, which is wedged in next to the pub that would be nice to have an ale at if there was somewhere you could park and be able to get out again, without hitting any ramblers lurking in gargantuan hedgerows. Despite its obvious perils, driving on this apparent A road is marvellously endearing.

I think it may be nine miles from Kingsbridge to Torcross but it can feel five hundred, and five hundred more. Torcross sits at the southern end of Slapton Sands, so named because the sands were obviously slapped on a ship and sent miles away, leaving only pebbles and more pebbles. Smooth and colourful and cleansing, they lend the seascape a pristine hue, and – if you don’t look too closely – the beach does appear as though it could pass muster in Australia. 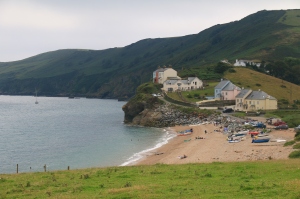 Like everywhere around this way, there is good walking to be had. Over the hill to Beesands with its less photogenic beach, and on to Hallsands, precariously awaiting the next winter storm. Beyond Hallsands the waters of Start Bay curve their way against precipitous slopes, topped with radio masts, sea mists and happy cows, giving way at Start Point.

I could push on to there today, but the hills get steep, my legs say no, and I still have the potential car parks of Dartmouth and Totnes to negotiate before getting home. One small mercy is that the tide is now out, and the hill between Beesands and Torcross can be circumnavigated via the millions of pebbles. Who needs sand all the time anyway Cornwall? It just ends up in every crack and crevice.

While the South Hams possess the requisite balance of thatched cottage to rolling pasture to pebbly beach, the somewhat tamed landscape eventually gives up and transitions to the wild uplands of Dartmoor National Park. Now this is truly on the doorstep. One minute you are navigating hapless drivers attempting to cross a roundabout to get to Tesco, the next you are passing hapless drivers braking sharply and pulling into the Dartmoor Diner. Civilisation may well linger, but it is quite possible to see nothing or no-one obviously man-made for lengthy periods of time when out on the moor.

For many Dartmoor is Plymouth’s playground, where you can stroll, frolic in a river, cycle, have an ice cream, walk the dogs, and fantasise about hairy hands. For me too it is something of a Red Hill surrogate. Though clearly not quite as close (i.e. 5 minutes), there are hills to climb and views to be had and, if you squint hard enough (very hard), the sheep may take on the resemblance of a grazing kangaroo. 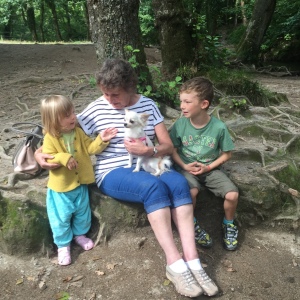 Just around the corner though (maybe 5 minutes with a good run of lights and a Bugatti Veyron) is the River Plym. Gathering down from the moors, the Plym gently meanders its way through leafy woodlands on its way to Plymouth Sound. One minute you are in an industrial estate, the next the lane narrows into a hobbit hole and you are bathed in shadowy leafiness. Again, children frolic, people cycle and dogs yap. Some (dogs) may even become potential kidnap victims due to ridiculous cuteness.

Plymbridge offers an easy escape – from Plymouth, from Asda, from endless episodes of Emmerdale. And it reminds you, quite simply and quite easily, how really lovely it can be to be in Devon. In fact, just as lovely as Cornwall.