I must confess to an inexplicable, in-built prejudice towards the city of Portsmouth. While not quite as menacing as the Daily Mail’s fear-stoking crusade for an antiquated version of middle England, my prejudice stems from uninformed and socially constructed antipathy. Nurtured through supposed rivalry – the battle of the dockyards – between Plymouth and Portsmouth, I have naturally taken the side of Plymouth, envisioning Portsmouth as lacking anything of appeal.

This prejudice of course exists without ever having been there. And so, it seems obvious to say that the best way to make an informed decision about the city of Portsmouth is to actually base it on real experience and facts, a principle that seems out-of-reach of many a lazy newspaper editor and Facebook re-poster the world around.

One (of many) positive things I can now say about Portsmouth is that it actually has a summer. Well, at least for one day at the start of August. This may score it points over Plymouth, whose current endless drizzle is slowly driving me mad. The summer skies (which now seem an age away) are penetrated by a rather large erection – the Spinnaker Tower – brought to you, almost inevitably, by emirates.com. This protuberance now dominates the skyline, suddenly popping up around various corners and appearing from distant vantages. It has a Sydney Harbour Bridge quality in this respect, and is almost as photographically alluring. 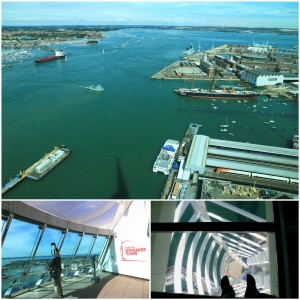 Indeed, atop the tower you could kid yourself that you are staring out at that great harbour of the southern continent, ferries bustling, sails billowing, cruisers cruising, waters glimmering in the sun. Then you taste a coffee and are brought back down to earth, only one hundred metres up, and your feet are plonked precariously on a glass floor. Shortbread for millionaires and the far-reaching views sweeten the bitterness and steady the nerves.

The First Fleet left this same harbour a smidge over 225 years ago, just one small trinket of history in what is, undeniably, a great naval city. Today, the Historic Dockyard aims to pack all of this in around one sprawling site. Such is its richness that you cannot hope to cover it all in one day, but a harbour tour offers a good overview and – again – sat out on the deck on a warming clear day, a slight pang of the Sydneyesque emerges.

Within the dockyard itself several old ships of worldly significance stand, a reminder of empire and industry and rambunctious naval warfare between derring-do admirals and rascally foreigners with finely groomed beards and bouts of Syphilis. The hipsters of their time, strutting the maze of stairs and low ceilings of HMS Victory or gliding the gleaming decks of HMS Warrior. Doing things that will later appear in vaguely recalled history lessons and espoused more memorably by Stephen Fry and co on TV.

The dockyard experience makes a sudden swell of patriotism hard to resist, and it is inevitable that Rule Britannia will start pounding through your head, interspersed with Sideshow Bob Sings Songs from HMS Pinafore. How patriotic then to have delicious fish and chips in a pub and drive back through Jane Austen countryside, satisfied that the city of Portsmouth is actually one of suitable constitution to befit inclusion in this Jerusalem.

Now, if I had prejudice for the English countryside it would undeniably be overly-favourable and rose-tinted, photoshopping out little blips like power pylons, speed cameras, and fields of slurry. It would be a scene closely resembling a walk through the Wiltshire countryside, starting in the quiet, affluent high street of Amesbury and finishing atop an ancient hill fort with the needle spire of Salisbury Cathedral gleaming in the middle distance. 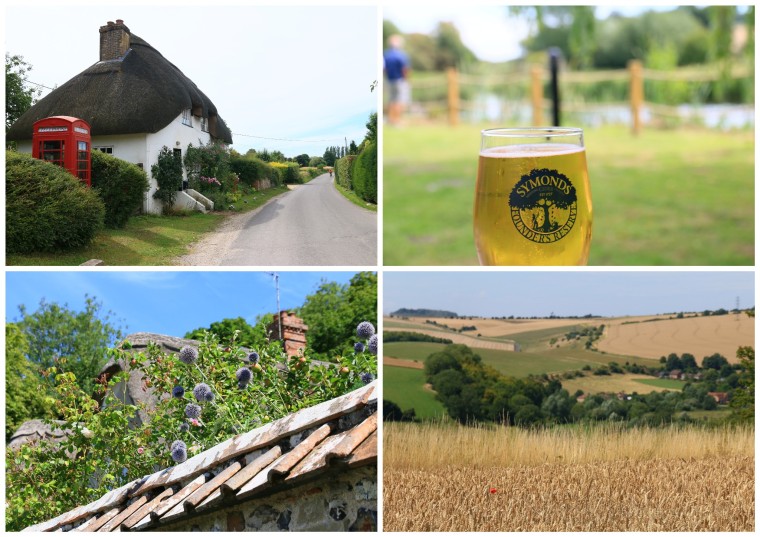 Along this serene, sun-filled walk, thatched cottages and glorious gardens scatter amongst sweeping fields of wheat and undulating grassy meadows. Shady wooded copses harbour tinkling streams and melodic songbirds. A village meanders along the banks of a crystal clear river, the pub garden its heart and soul. Country lanes melt away into the hedgerow landscape, and weathered stone bridges hint at a past industriousness.

This is all enjoyed on the second day of summer weather in a row, a rarity as scarce as the ability to wear shorts, which is also somehow happening. It is pleasantly warm rather than scorching, but conditions are adequate enough for cidery refreshment at the midpoint. While post-drink malaise now seems a little more conducive for a nap than a hike, we push on up onto a ridge and then to the summit culmination of Old Sarum.

With 360 degree views, Old Sarum obviously made sense for original Middle Englanders (and then various waves of migrants) to construct defences and forts and castles and cathedrals. Sat atop its slope eating lunch, it is quite easy to imagine pouring some scalding hot oil on a pesky interloper who has made it across the deep moat. However, life today is generally more sedate and the only oil to be found is something like cold pressed balsamic infused deluxe extra virgin organic Tuscan olive oil offered with semi-dried tomato and wild chevre slow-rise sourdough served up in nearby Salisbury. I would have settled for an ice cream, but then not everything can be perfect on this exemplary English day, on a consummate, enlightening British weekend.