[Best read in David Attenborough style]: As the temperature cools in the southern part of the Australian land mass, the first signs of an incredible migration start to appear. Senior males of the species are spotted in pockets along the coast, struggling to grasp with the multiple tasks and devices which will propel them north. Reserves are gathered to a state of surplus, and a battle for alpha male superiority subtly ensues, a contest which will last across the season.

But here, it is the female that rules. Freshly groomed and adorned for the long journey, small numbers congregate. While not always harmonious, they band together for the greater good, bound by a common aim: maintaining survival, comfort, and subjugation over their once proud male partners. Hunting out and often gathering the food, directing the placement of shelters, maintaining the hygiene and lustre of their coats. In groups characterised by auburn dyed hair and expensive designer spectacles funded by generous tax breaks, these females underpin the mass migration that takes place.

And so, in June, across the more northerly coasts of this great continent, the grey nomads begin to cluster. They flock in their thousands to known waterholes. Sites like Carnarvon are almost overwhelmed by the influx, its banana-rich pastures transformed into shanty towns and its pharmacy inundated. The males continue to display in a parade of sandals, white socks and short shorts but, predictably, with little impact. After a while they retreat to seek out fish and engage in ablutions, but there is still competitiveness over the size and strength of their equipment. Some will settle here, and see another winter through with their mate. But others, with stronger torque and deeper reserves, will head on, north to the next great gathering place.

[Back to normal voice in your head]: My first significant encounter with a mass gathering of grey nomads was back down in southern Australia, in a pleasantly ambient March. It was apparent that Mudgee – a NSW country town standing out from many of the others thanks to pastoral affluence and providores – was an alluring spot for ripening baby boomers to hook up their motor homes. A caravan park beside the river, close to town, with excellent ablutions that may have won an award for hottest power showers in the west was always going to prove popular. And so it was that the mini street blocks dumped onto a meadow were crammed with a veritable mix of shiny white coaches and ramshackle fibros, often adorned with an auburn-topped lady in a folding chair reading through her expensive spectacles while a rangy male figure stumbled around trying to figure out how to empty the septic tank. 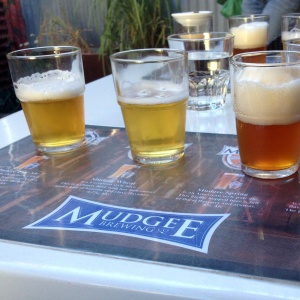 Campers, as so often, were an afterthought. Allocation to a small patch of grass that possibly classifies as a verge. Sited next to the river, but with the downsides of an adjacent public right of way and numerous biting insects. As ever, placed in the most open and prominent position so that all can look on in bemusement at the canvas contraptions that somehow you and your companion manage to be sleeping quite comfortably in. Swags were always a source of much fascination and eternal debate amongst the nomads, with lively discussions around one’s own ability to survive in such a thing and – on occasions lubricated by grape juice and a great Aussie irreverence – the possibility of sexual intercourse in such a structure [i].

Deflecting much of this attention and offering comradeship against the rows of Grand Adventurer 3000s and solar-panelled satellite dishes tuned into Today Tonight, one other person was braving the use of canvas in Mudgee. And quite amazingly it was one of the greyest of the grey nomads, a dear old lady cycling all over Australia towing her belongings, one of which was a stuffed dog [ii]. There is always someone or something to ruin your sweeping generalisations and lazy stereotypes, darn it. Anyway, being one of the few persons on site to actually need the kitchen facilities (I say kitchen, but think sink and a few tables under a picnic shelter), it was discovered over breakfast that she was in need of a cataract operation, possibly because she hadn’t invested in a pair of those expensive designer spectacles. And with a few delightfully cutting comments about the extravagance of $100,000 motor homes, she loaded up and wobbled on to the next stop down what I hope she knew was the main road.

We never did come across this cycling legend again, something I am pleased about in one sense because I had horror images of finding her happily peddling down the wrong way of the M5, the stuffed dog the only one alert to the situation, a terrified expression on its face. But it is quite possible – indeed highly likely – that you will encounter the same nomads, recognise the same Grand Adventurer 3000s, bump into the same old guy off to the ablutions for his dump, during the migration season.

Rob and Sue – well we think they were called Rob and Sue so that is how they became known – spotted us first. Apparently I had overtaken their car and trailer about ten times that day on the most boring stretch of road to cross the Nullarbor. I can’t say I noticed, because that boring stretch of road was so soporific that senses became dulled, and the caravans and trailers all took on a likeness and started talking to me and whispering sweet nothings as I hazily overtook them at 140kph, all entirely safely as pink elephants blew champagne bubbles through their trunks and out into the endless sky. But over a roast lamb fiesta in the quite delightful Fraser Range Station that night, they recognised us. I suspect a shiny blue Outback with a roof box and what were relatively young people inside (it’s all relative) were a more distinctive site. And as Rob recounted being overtaken ten times that day by some young hoons in a Subaru, my mind tried to recall whether any of those manoeuvres were in any way dodgy [iii].

Rob and Sue were quite lovely, in that quite lovely way where everything is quite lovely. Kind of like the quite lovely aunt and uncle who would have a quite lovely lovingly kept home and would happily let you stay for a lovely dinner and sleep in their quite lovely spare room. They were younger nomads; indeed there was a chance that Rob might still go back to work after their little test of the waters. They didn’t even have a proper motor home, just one of those plain trailers that somehow transforms itself into a suite at The Ritz. I’m sure they didn’t quite see themselves in the same mould as the wildebeestian hordes of socks and sandals and designer spectacles, and were glad to speak to some youth for a change [iv].

Anyway, the next day as the end of the Nullarbor beckoned, we passed Rob and Sue a few more times as part of that drive-rest-stop-drive tango, but now always with a friendly flash of lights and gesture to the pink elephants blowing bubbles in the sky. We marginally missed each other down in Cape Le Grand National Park near Esperance, a fact I discovered when we came from opposite directions to cross in the quite amazing Fitzgerald River National Park [v]. Later, I think they may have been a few vehicles in front of us at some lights in Denmark. And we fully expected to bump into each other once more, migrating north up the west coast of WA. So it was with some disappointment that Rob and Sue vanished into the great tarmac ribbon on red dirt, never to be seen or considered to possibly be stalking us again.

I reckon they were always a few days ahead, due to us lingering around in some backwater like Perth, finally drinking good coffee and wasting time in its breweries and beachside cafes. They were not there among the few souls braving the annoyingly icy waters of Shark Bay to see dolphins being fed; neither did they emerge from the masses crammed into the favelas of Carnarvon, a site which appeared to be only one step removed from a season finale of The Walking Dead; perhaps they weren’t brave enough to stop at the the very rustic setting of Quobba Station or enjoy the jackaroo appeal of Bullara Station, even though a few alternative, non-stereotypical nomads could. 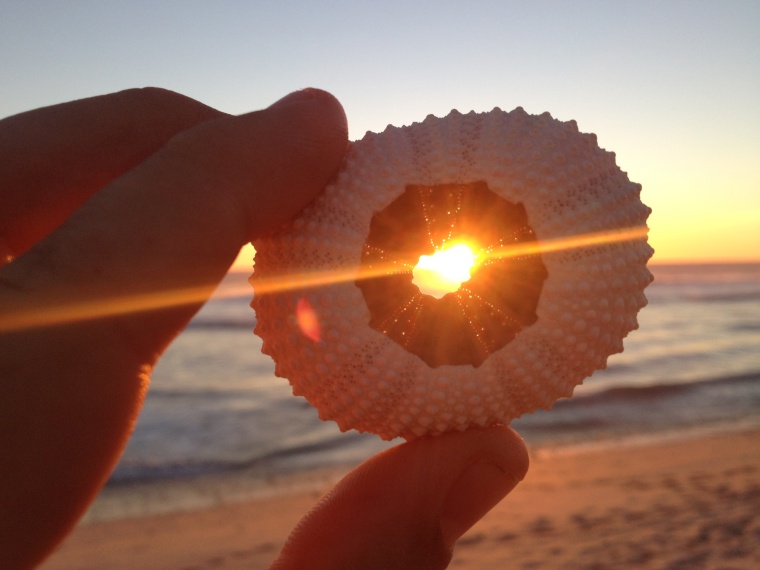 [And so, back to Attenborough]: In the northwest corner of Western Australia, Exmouth is the next staging post for the nomads. Here though, they come up against some younger bucks who could represent a threat to their existence: outsiders from France and other wild lands with extravagant plaits and body features that are proudly displayed, yet to sag. Competing for prime locations next to the ocean from which to alternately strum guitars and read books, there is an uneasy peace between the two groups. As the fine weather holds, an air of acceptance persists and the species cohabit side by side, with Derek very friendly towards young Amelie much to the disapproving over-the-spectacles glare of Margaret.

[Cue crack of lighting and thunder rumble scene, signifying, uh-oh, trouble]: But an unseasonal low pressure storm approaches. Some hunker down, others retreat to the cheapest motel to make the most of the downtime and look at some research publications and transfer the content into an excel spreadsheet in order to save the world. Trouble and coffee brews.

As the rains continue, the wily nomads now sense their opportunity. Secretly unhitching the power and emptying septic tanks in the quiet of dawn, a convoy gathers on the one and only main road of Exmouth. Emboldened by their superior torque and sixteen speed automatic military-spec drive, the nomads traverse the flood plains to settle in drier and warmer climes. Basking in Broome in tinted designer spectacles, they leave behind a melee of Wicked campervans bedecked with misogyny and potentially fatal odours. The grand migration of the common grey nomad carries on unstoppable, and we leave them on their endless roaming and return south.

[i] Important interpretative note: by ‘possibility’ I refer to consideration of the practicalities of such actions being feasible in such a structure, rather than a request to give it a try!

[ii] Now, I am no Lance Armstrong, but I would imagine that you would do everything possible to minimise weight when cycling across Australia. Apart from those important coke cans for transporting syringes of unicorn blood.

[iv] If there is one thing to be said for surrounding yourself with grey nomads it is that wonderful feeling of being made to feel a youngster again. Having said that, typically we were the first to bed and departed the site the next morning before many of the older ones had stirred!

[v] If ever you have chance, go there.