Sometime around May I usually ramble on about the beautiful autumn days, with their deep blue skies and cooling nights, blazing leaves and subtle sunsets. It is tremendous and I am convinced that it is the best season in the national capital. But then, after a hiatus for different seasons in different hemispheres, spring appears and it is hard to argue against it. For what spring has that autumn lacks is the encroachment of warmth, the re-emergence of life, the dawning of hope sailing on an upward curve. Encapsulating this, the daffodils that were just sprouts when I went overseas are transformed, nature performing its perennial magic trick from seed to understated wonder.

Coming back to Australia, to Canberra, at such an opportune time provides an extension of the holiday feeling, coupled with some comforts of homecoming and familiarity. It helped that I overcame jetlag very quickly and had little work for a week or so. Blue skies and comfortable warmth – tempered by a few cold nights to guard against complacency – offered better conditions than, say, Switzerland. And everywhere, things coming to life, waking up, bursting into extravagance. Settings made the more amiable with a good coffee in hand.

Nowhere is nature’s spring display more evident than at the Australian National Botanic Gardens. Well, maybe Floriade, with its millions of tulips and thousands of daffodils, is a contender. But the botanic gardens – as contrived a creation as they are – feel much more natural, an exhibition of Australia’s wacky fauna in an authentic bush setting.

Here, plants were flowering everywhere, colours and fragrance and the buzz of industrious insects pervading the air. One microscopic bug managed to somehow find itself somewhere within my camera lenses, occasionally crawling into the frame. It was whilst sat down in a quiet spot trying to rectify this situation that the king parrots decided to join me, and to show that it’s not just the flowers that have a monopoly on springtime colour. 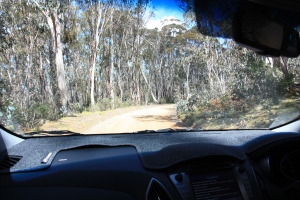 Should sleepy and sedate little Canberra become a touch crammed with life, the vast wilderness is of course just around the corner. This, like better quality coffee, is one of those very obvious differences that become so sharply contrasted following a trip to Europe. It doesn’t take long to be climbing on a dirt road into the bush, helping to test drive some friend’s new car, pleased that a four wheel drive is actually being used properly and not just for picking up the kids from school. Up on the Mount Franklin Road, very little other than the wild fills the views, and other roads and tracks tempt for another time. 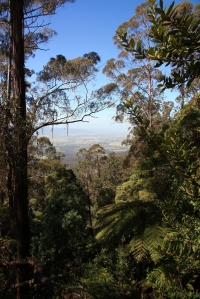 Indeed, I felt the urge myself to get in my own car and make a road trip, since it has been quite a while. In the other direction, the south coast awaits and what better way to see in my birthday than to drink and eat by the water? I decided, fairly last minute, to head down towards Merimbula, stop overnight and, well, drink and eat by the water. It was a route I had not done for some time and, after the very barren plains of the Monaro, the reward of the South East Forests and Bega Valley is welcome. More welcome, perhaps, is the Nimmitabel bakery chicken salad roll on the beach at Tathra, where the south coast is just doing its usual thing of being stunning under a blue sky. 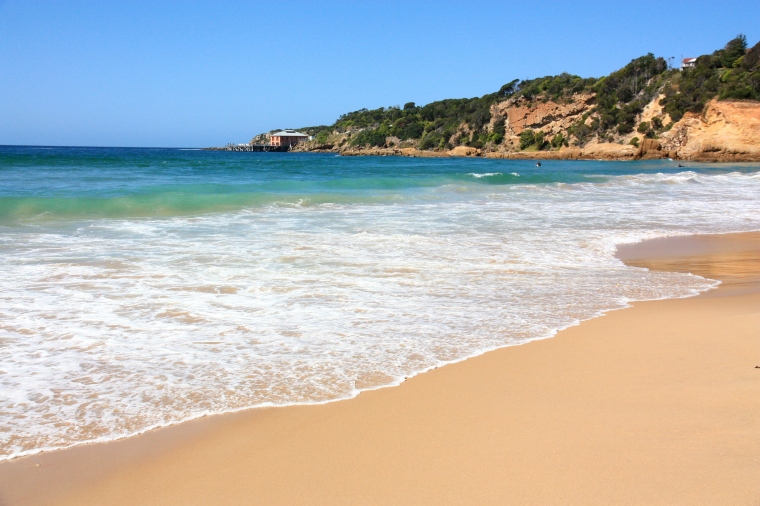 The rest of the day encompassed some old favourites, favourites that were last visited on the very early stages of some much bigger trip I embarked on in 2013. Back then, after camping next to Ray Mears in Bournda National Park, Merimbula was grey and cool and – later in the day – rain would pummel Ben Boyd National Park to the extent that the roads became slush. Today, well, it was good for shorts and the bellbirds were much happier down on the delightful Pambula River, at the northern edge of the national park. 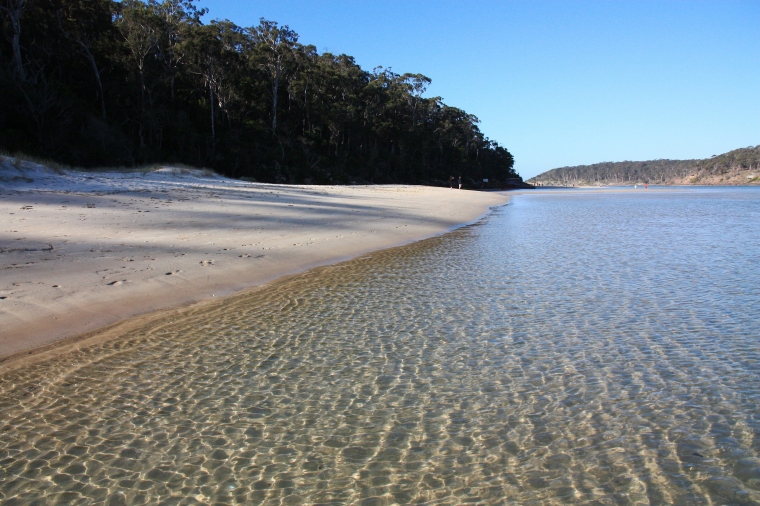 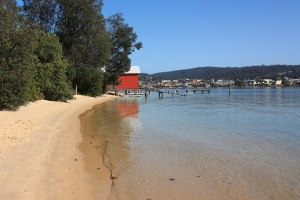 Dinner was fish and chips, obviously. Not as gargantuan as the last time I had fish and chips and not as English – in this case, unfortunately. However, should one pine for English food for too long, there is always a chance to savour the saviour that is a flat white. A flat white the following morning after a gentle walk along Merimbula’s main beach and into its inlet. A flat white served from a beach hut by charmingly hipster-leaning youngsters…the type that usually make the best coffee. A spot in the sun with a flat white overlooking the paddle boarders and swimmers and boat people cutting a course through the opaque sapphire water. A drink to stimulate taste buds and senses for brunch elsewhere beside the water. Happy birthday to me, and welcome back.

Brooding . . . . . #sky #storm #weather #clouds #thunder #landscape #canberra #visitcanberra #abcmyphoto #explore #outdoors #walk #rain #australia #summer #troppo #nature
Love is... The joy of becoming part of a wilderness on your doorstep. Hoping this beauty will recover, as it has done before. I wrote a blog post full of Namadgi memories, recent and past (gbpilgrim.com -link in profile) . . . . . #wilderness #landscape #views #nature #hiking #australia #bush #mountains #outdoors #explore #travel #canberra #namadgi #visitcanberra #sky #light #colours #bushfires
Survivors . . . . . #eucalyptus #australia #nature #wildlife #trees #outdoors #walk #explore #sky #actparks #colours #drought #bluesky #canberra #visitcanberra
Could use rain. Smoke in the background is from the Orroral Fire, which has now burnt through 850 square kilometres of Namadgi National Park, equating to around one third of the ACT. Most of the smoke visible this afternoon was a result of backburning operations, hopefully to safeguard Tidbinbilla Nature Reserve which is at the northern edge of the fire front. Rain is forecast over the next few days... bring it on! . . . . . #landscape #australia #drought #bushfires #canberra #countryside #nature #light #clouds #walk #outdoors #explore #visitcanberra #bushfiresaustralia #canon #colours #view #actparks #abcmyphoto
Who ever said Canberra was dull? At least the morons sent by the people of Australia to our home to supposedly run our country will get a taste of this in their throats tomorrow . . . . . #sunset #smoke #bushfires #canberra #lake #bridge #sky #colours #silhouette #reflection #visitcanberra #australia #abcmyphoto #abccanberra #bushfiresaustralia #drama #canberrafires #summerfromhell
Today’s scenes - Orroral Fire in Namadgi National Park taking hold . . . . . #bushfiresaustralia #canberra #australia #fires #smoke #orroralvalleyfire #summer #bush #abcmyphoto #abccanberra #emergency #views #nature #canon #endlesssummer #canberralocals
It ain’t over ‘til it’s over . . . . . #bushfiresaustralia #views #smoke #sunset #clouds #landscape #canberra #visitcanberra #australia #abcmyphoto #nature #outdoors #fire #light #evening #canon
The last two days spent clearing fences on Paul and Andrea’s farm has been a challenge. But also incredibly uplifting. On top of a hill in beautiful country near Batlow, everything bar their home was blackened as fire attacked from three sides. Their farmhand, Smiley, lost his hut and possessions, while the forest they use to produce eucalyptus oil is reduced to ash. One thing they haven’t lost is their generosity, humour and warmth. From Smiley sharing tales of giant fish caught in the dam to their experiences saving their home and each other on January 4th, they have welcomed us amateurs into their world with open arms. Fixing fences and building bridges. The highlight of today was being welcomed back to their home after pulling out our last fence post, sheltering from the blessed rain and being offered a cold beer along with a pack of eucalyptus oil and soap. The gift was lovely, a sign of their kindness, but chatting for half an hour like old friends at the end of the day was even better. Conversation and connection matters in times like these! They have really touched me and, as tough as things are, they are getting on with life as best they can. A positive from the fires they pointed out is that it cleared the land of all the invasive blackberries! And Smiley is gonna rebuild a hut where he can again dream of teaching a young dog some old tricks. 3.5km of warped and charred fence cleared. Tomorrow is another day, another place. Check out BlazeAid. . . . . . #community #countrylife #australia #bushfires #farm #nsw #batlow #snowyvalleys #blazeaid #bushfirerecovery #landscape #fires #volunteering #tumut #eucalyptus #hivis
Rain you say? . . . . . #australia #landscape #countryside #view #nature #outdoors #explore #roadtrip #drought #gundagai #visitnsw #summer #dry #farmlife