It may be a product of sustained transience but the chance to drop anchor for an undefined period in a familiar place has been of great appeal. And so here I still am – Plymouth, Devon – and only twice so far have I pined for the other side of the world. Once I was in Starbucks and had a drink that had the front to be called coffee. The other time, some dreadful nincompoop and his bumbling mates were taking over Australia, and while I was not missing the crowing and hollering, my inner nerd was bereaved of two party preferred counts, the swings, the coloured maps and the abject head-shaking of democracy where a mandate is claimed when less than half of the population vote for you and, even those who do, probably do not agree with 100% of your policies.

Plymouth can be incredibly miserable but at the moment there is a prolonged ray of sunshine that transforms even the dodgy concrete alleys filled with rubbish bags into an artistic postmodern composition of urban life. The crazy drunks walking the streets become salt of the earth characters and chavved up pram pushers on the bus make for a colourful melee of handbags and hairdos. I’ve heard it said that Australia is just like Britain would be with good weather; not exactly, but the weather can do wonders for a place.

The familiar abounds but every time I return there are incremental changes to the city. Royal William Yard is an obvious one and I have been impressed by the conversion from disused naval quarters to swanky flats and waterside cafes. Devil’s Point provides the picturesque walk to burn off jam and cream filled shortbread from the bakery, and something approaching an alright cappuccino is available on occasion.  On my first visit, in warm Sunday sunshine, I had the momentary feeling that I was back in Australia such was the sparkle, the relaxed buzz, and general air of wellbeing. I even had a flat white, but this was very English. 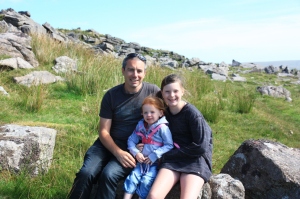 Part of the familiarity re-familiarisation process is engaging in the foodstuffs of this part of the world. The issue is, the longer I linger, the less I can justify filling my face. On day 1, cream tea on Dartmoor was ticked off and clotted cream has re-appeared on a number of other opportunities (like when I made treacle tart, yum yum!). But I have also been back to Dartmoor and not eaten cream – something that sounds like progress. Meanwhile Dartmoor continues to captivate through its moods and sweeping vistas. 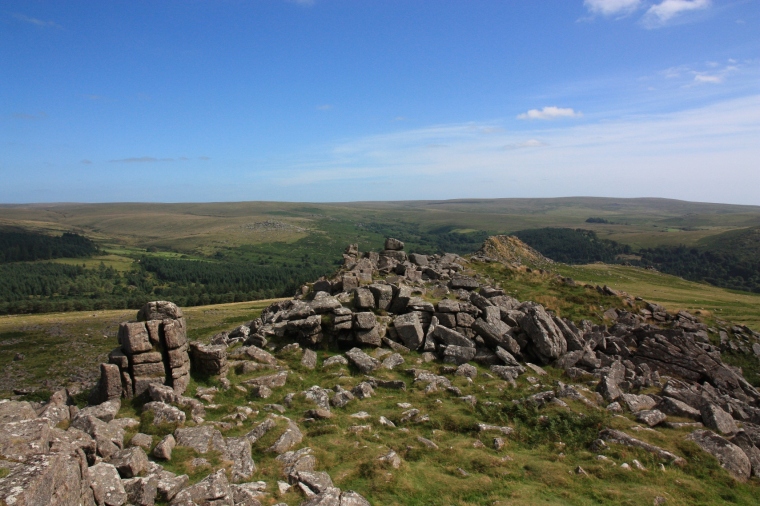 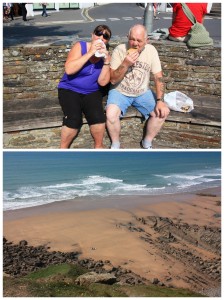 The Cornish pasties have bubbled to the surface like oozing hot steak juice through a pastry crust, though only infrequently. Almost every single one I have is a disappointment unless it is from Pengenna Pasties. On which note, I am pleased to have paid a visit to Bude where the queues out of the door and mass munching in the town square are a sure sign of Pengennirvana. This was the undoubted highlight of a bank holiday Monday, which was a reminder of what a bank holiday Monday is all about. Traffic queues, parking hassles, gritty sand packed with feral children and people from Wolverhampton going red in the twenty degree heat. I didn’t really enjoy Bude apart from that pasty.

By contrast another day trip in Cornwall ranks as one of the best I have had this year; a year which, I remind you, has encompassed a tour of New Zealand and a scenic meandering across Australia. A piddly train to Penzance doesn’t rank up there with the journeys but then an open top double-decker through the narrow lanes and warm sunshine of West Penwith brought a sense of adventure to the trip. And this delivered me to Porthcurno and a scene to celebrate, a landscape bejewelled in sand and seas bedecked in a stunning clarity and rare calm. 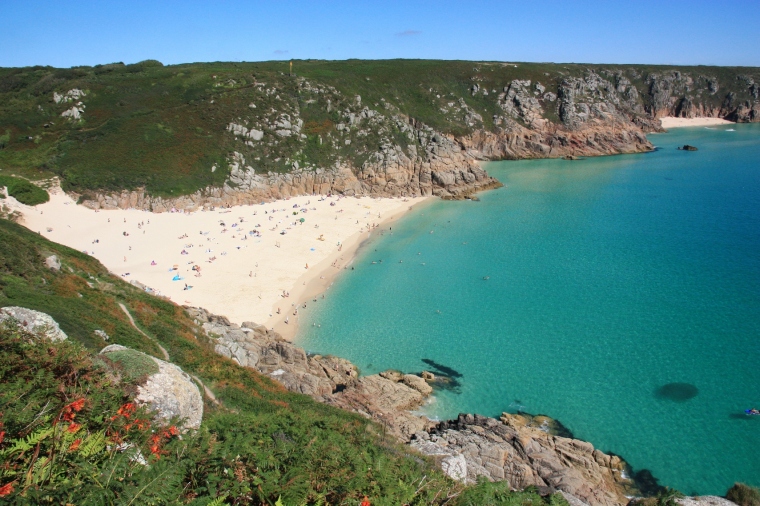 This is the pointy end of Cornwall, the pointy end of Britain, and if anyone thinks Britain is a drab, miserable place, well…stick ‘em with the pointy end. This is country best explored on foot, on that magnificent coastal path, a path I followed for seven miles or so around Land’s End and on to Sennen Cove. It is stunning country and every minute was marvellous. Of course, you have to put a little asterisk here and acknowledge that the sun shining makes a world of difference. But even on dank, foggy days or, better still, stormy windswept occasions, it is a natural wonder. 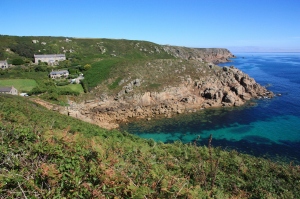 The coast path along here turned out to be pretty good walking too, only dipping down to a cove and climbing arduously up again about four times, which isn’t that bad for Cornwall. A lot of the time you can just follow the cliff line, strolling upon high overlooking clusters of volcanic rock tumbling into clear blue seas, where the occasional trio of seals bob along and seabirds glide on warm air.  Around, the exposed heath is a colour of gorse and heather, a purple and gold that could quite justifiably replace the black and white of the Cornish flag. 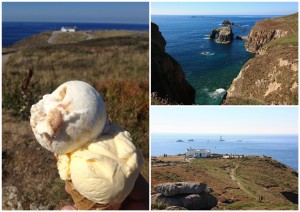 A blip of sorts pops up at Land’s End. While the coastline is appropriately craggy and exposed, the necessary touristification due to popularity takes away a bit from the surrounds. So there are eroded paths down to see grumpy farmyard animals, shops selling fudge made in Wales and tea towels made in China, arcade machines to play and One Direction posters for sale. There are doughnuts and beer and ice cream to buy. Stop. Ice cream. I’ve been walking five and a half miles. Ice cream. It’s mid afternoon. Ice cream. I deserve ice cream.

Expecting lame, rip-off ice cream I remember it quite fondly as not being particularly lame or too much of a rip off. A popular Cornish brand it had enough creaminess to see me over the last substantial hummock of the path before dropping down to Sennen Cove. I remember coming here about ten years ago, on a mild but foggy old day, the cove sheltering a fine sweep of sand intermingled with cottages and boats. It was deathly quiet then, a sure contrast to today.

Today Sennen was St. Tropez, but thankfully the beach stretches beyond the comfortable confines of the car park. Once over towels and tents and through ball games, the beach widens and empties. The sand is genuinely sandy and the water a clear shade of blue. Surfers attempt to do something in the lumps and bumps of wave that exist on this breathless day while lifesavers watch on. Yes, it is, almost, Australian. 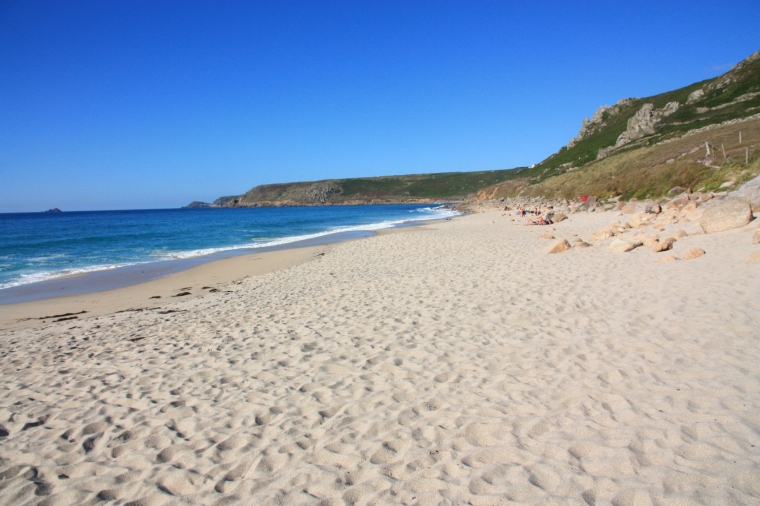 It’s kind of funny how I look out for a touch of the Australian in Britain and when in Australia the opposite happens. I presume it’s the whole have your cake and eat it syndrome. When both do come together – like in the creamy green hills around Kangaroo Valley or the sunny, civilised sands of Cornwall – it’s something of a marvel. And while misery quotients and government philosophies reach common ground there is little to distinguish one over the other. For now.