Once upon a time there lived a curious fellow with salt and pepper hair and ten year old T-shirts that had faded in the sun but, he thought, had not quite worn enough to really justify throwing away. He was somewhat transient in nature, rarely settling in one place for too long, and got a little restless when forced to stay on one spot, like a golden retriever longing to chase a stick thrown just over the horizon. This state was not helped by a chronic inability to make long term plans or grown up decisions. Rather than seeing this as a failing however, he decided to positively embrace it by going on little trips and adventures to take in new worlds and experiences, and to document it in his own haphazard way.

It would be fair to say that he had a tendency to be cynical and sceptical about things as he went around. There was no pot of gold at the end of the rainbow or yellow brick road taking you there. Fairytales were the realm of fantasy, moralistic feel good stories that had been endlessly rehashed for commercial TV and cinema. Actually, he did have a certain fondness towards Beauty and the Geek, not that he would admit this of course. He liked the Beauty’s naive charm and hot legs, and perhaps envied the Geek for a short moment. Plus Shrek was okay, up to a point.

So it was with wide-eyed amazement that on one of his little escapades he found himself in some kind of fairytale world. The day hadn’t really started that way, as he lugged his bags on the number 82 bus from Finchley to Golders Green, and hopped aboard a coach to take him to an airport in Essex of all places. The coach did have free wifi and the airport a good deal on soup and a sandwich, but this was hardly up there in the land of fairytales. The plane too – sturdy, reliable, no fuss – was agreeable enough, and the flight offered views of mountainous realms and lakeside charms. And it was somewhere amongst these mountains that the plane touched down, and the new land of Slovenia awaited him.

He was welcomed with a hire car and a motorway, not quite a yellow brick road, but proficient enough to carry him hastily to this fairytale world; a world where a lake of turquoise and opal and jade blended into one glassy whole, and from which rose a tear shaped island, decorated with a single church tower; a tower whose bell echoed across the water and permeated the leafy forest shore, no doubt prompting a few tired leaves to float to the ground as each wave of sound shuddered against the branches. On the water, row boats sliced silkily through its calm, each carrying a Prince Charming and their Princess, or a gaggle of ugly sisters, towards the island. High above perched atop a rocky crag a castle brooded, keeping watch on the lake and island, and resisting the weight of mountains behind it.

Lake Bled was to be his home for a couple of nights and he lived his own fairytale in his own happy way. He filled up on breakfast beside the windowsill, overlooking the world as it came to life and humans began to entangle themselves with the landscape. He walked the perimeter of the lake on a cloudy, drizzly morning, even more captivated by the sombre cloak the elements had thrown over the land, and the solace of that bell on that church tower on that island. He had a coffee beside its shore and was pleased of the quality and friendliness with which it was provided, for very little pleased him more. Later on some local sausages and wine, plus a quest to find Bled Cake, satisfied him still further. 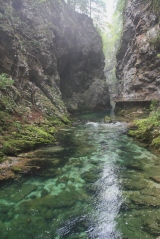 The fairytale landscape appeared to spread beyond the lakeside and, despite the inevitable persistence that comes with drizzle, he became captivated by a seemingly timeless and hidden gorge, carved out many eons before. The green waters of Vintgar Gorge had a mystical property, as the river sliced its way through, around, and under rock while tree roots and branches clung precariously to the narrowing and steepening sides of the valley. An ancient wooden walkway hovered above the river, as hundreds of trout waited for something, or someone, to fall in. Around the next corner there probably lurked a dragon, while hidden above the cliff a fair maiden waited, longingly hoping for a handsome man to pull on her matted locks of golden hair.

The following day it was time for him to put on another clean but old T-shirt and leave this fairytale enclave and move further across the realm. This was none the less enchanting, from snow kissed mountains to tumbling icy blue rivers, passing by the clusters of old cities and towns with their ornate facades and steeple fringed skylines. And then rather circuitously down to another lake, Bohinj, which presented a more pastoral scene of Heidi milking cows while Julie Andrews and some kids wailed from the peaks above.

Here, among the narrow streets of a village peppered with wooden chalets also lay a sense of darker, gothic folk tales embossed in the burnished beams. Like the story of a curious fellow climbing a mountain, persisting upwards through rough hunting trails and never giving up, never turning back. And for this effort, encountering just a sparse plateau inhabited by rabid dogs and crooked nose peasants, while back in the valley sat a welcoming, sunny village with flowery meadows and bales of hay. The moral of this tale: what you find around you at the bottom of the mountain can be better than that which sits at the top. And, always stick to well marked and mapped out trails.

A good fairytale is nothing without a happy ending and for this the man returned to the magical surroundings of Lake Bled, unable to resist its allure, despite his prior dislike of fairytales. After the frustrating climb of the previous day he wanted to use his efforts more productively and reach a pinnacle, a place from which he could look down on the land like a giant upon a beanstalk. It was a good job he was wearing another old T-shirt for it was a steep and sweaty climb in the late afternoon sunshine. However, upon reaching the first point at which he could cast his eye below, the sun had disappeared behind a mountain, or had possibly been put in shadow by the billionaire owner of a nuclear power plant, and the scene was dull and flat. But by time he reached the very top of Osojnica viewpoint, the sun emerged again and all was illuminated below. Persistence and patience pays off.

The church on the lake was still there, with rowboats milling about and the bell ringing out to all around. The castle looked less broody and imposing, as it sat below his vantage, and was dwarfed by the rise of mountains behind it. The lake took on deeper blue hues from where he stood, projecting a sheen like candle wax. And the sun remained for just a few more minutes as he documented the experience in his own haphazard way.

While it is still too early to tell whether he lived happily ever after, the fellow had again a deep appreciation for his circumstances and the opportunities that came his way. Thankfully he didn’t quite lose his cynicism, for that was an essential part of his character, but he did appreciate that fairytales of a sort were happening all the time. They may not be the fantasy stories of dashing princes who looked a bit gay and demure princesses who were secretly hot; or yarns about ogres and dragons and talking donkeys. But he did see that there was wondrousness all around, on this real land in places both near and far, far away. The world is our fairytale and we make our own stories in it. And he continued to make his story every day, always trying to admire and appreciate the land around him as he did so.

Live in a fairytale on a budget at Pension Pletna: http://www.pletna.com/en

Not so sleeping beauties or shrinking violets: http://au.tv.yahoo.com/beauty-and-the-geek-australia/