As an Anglo-Australian male in his thirties it is inevitable that beer has accompanied me on many occasions on the road and at home. At such times when one needs to know, like a doctor’s interrogation or unethically intrusive job interview, I’d declare myself one of these ‘social drinker’ types. From what I can tell, a social drinker is someone who grabs a beer or two when the mood fancies – to celebrate, relax, or navigate slightly awkward moments – or just when it’s the only thing cold in the fridge and you just can’t be arsed to scrape ice out of the freezer. Very occasionally the charming delight that you become after such social drinking turns sour (usually thanks to the beer being ‘off’ or some such), and imbalance and language difficulties can ensue.

The sage philosopher, Homer [1], remarked of beer as a “temporary solution,” in easing the challenging realities of existence. This temporary solution is also uncannily permanent around the world in which we travel, providing a readily available, relatively cheap source of comfort and joy. Though naturally something of a haze, I can look back on my life and recall a number of places and experiences that have been enhanced by beer or, broadening the spectrum a little, a good glass of wine or a tangy local cider or a holiday water style G&T. Often the drink is the icing on the cake, the encapsulation of a special moment. At other times it’s invariably been an antiseptic, painkiller or narcotic. 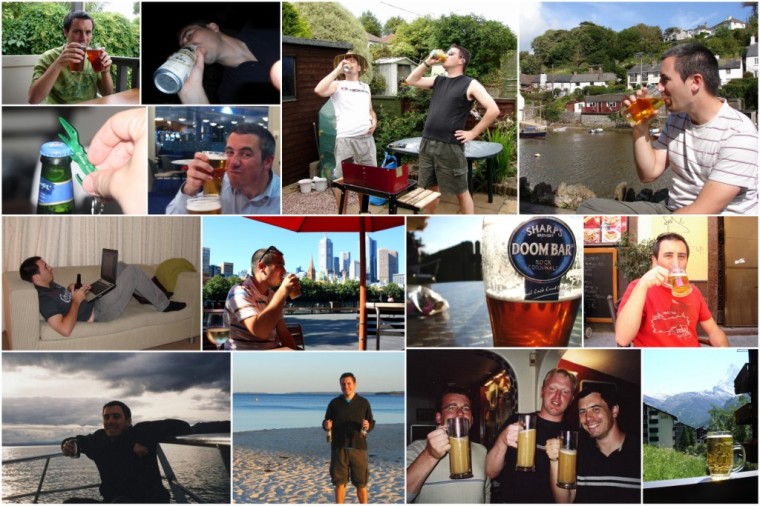 A proven value of beer when travelling is in how it can transform the first shy mumblings of disparate individuals on a tour group into one animated tribe. While the first day of such trips may have been spent quietly on the bus in little cliques of friendship pairs, the second day is typically dominated by shared tales of what scandal befell Jared and Janelle, and frequent hilarious stops for Lance to chunder like the man he is from down under. Meanwhile the tour guide acts like this has never happened before and this group is – based on the escapades of the previous night – simply the most awesome ever [2]. Multiply this all by several days and nights and you are left with a teary, hollow feeling that you will never be as one again when the trip is over and that Lance’s chunder is now but a trickle down some distant highway. This may sound like a young persons’ rite of passage, but I daresay the same happens on more senior and old at heart tours, just replace ‘beer’ with ‘wine’ and ‘chunder’ with ‘incontinence’.

Unless you happen to spend a large part of your time meandering in the Middle East, beer is an international language, demonstrated by the fact that almost every country has its own version. Within countries, different regions produce their own local brew and it can be a strong marker of local identity. Obviously one of the joys of travel is sampling local food and drink and I’ll always look to a local beer if I can, unless I have already discovered its similarity to the secretion of a small flying insect, or “gnat’s piss” as it is sometimes described. The trick for the traveller is to know the local beer sensitivities, so as not to order some nancy fruity lager with low carbohydrates in the North East of England or the culturally offensive XXXX from Queensland in anywhere but Queensland [3].

Moving from England to Australia in 2006 I have gradually come to learn the sensitivities of what must be two of the most rampant beer swilling nations. My biggest faux pas was when fresh off the boat and still subject to irritants like Shane Warne. Tasked with getting some beers in for Friday work drinks I grabbed a crate of stubbies from the local Bottle-O [4] only to be chided for their warmth. The stubbies felt pretty cold but that was in fact ambient air-conditioning temperature and not arctic freezer temperature, which was how the locals preferred it. And now, after six years or so, that’s how I like it, perhaps because it’s the only way to subvert the lack of taste.

Beer has been part of my cultural integration and a means to become accepted as a bona fide Australian. A barbecue with awful slimy sausages does not feel right without a beer in hand, cloaked in a tacky stubby holder. Mercifully, even those who were subject to my warm stubbies have become good friends, and I have since shared drinks with them fresh out of the chillers of a 7-11 in Hong Kong, wandering party streets with beer in hand, inevitable ending up in Maccers at night’s end. This was one of those experiences where the beer must have been ‘off’, since a malaise lingered for the rest of my stay there.

Australian beer consumption seems natural in the outdoors, huddled around a barbecue, the droning of cricket commentators in the background. It’s also a good accompaniment beside the sea, tasting even better after an active day of exploring and coasting. One such memory stands out when I was in the Margaret River region of Western Australia. Here, after a blissful drive south from Perth, the day’s end saw me at Prevelly, a low key settlement on the coast, popular for surfing or just hanging out like a surfer. The headland here is actually called Surfer’s Point, and this particular evening it was jam packed with people of a dreadlocked and slightly skanky looking nature, plus their groupies. Inexplicably, many were clambering over the rocks with what looked like ironing boards to bob up and down in the water at prime shark feeding time. Others were returning from the water, getting changed with very little discretion around their beat up vans. There wasn’t just the one full moon that night.

Positioned the other side of the headland was another cove where the Margaret River itself came to a halt against the sand. With a sandy beach, sun disappearing over the ocean, full moon rising over the river, ambient temperature and vibe and one beer lugged several kilometres in the pocket of my shorts, the scene was set. Twisting the bottle top of my beer and nirvana was within sight. Apart from the fact that the bottle top wouldn’t twist off. It was one of those fancy boutique beers requiring a bottle opener. I could have cried.

In such circumstances one finds oneself thinking what Bear Grylls would do? But given I neither had a film crew nor nearby hotel in which I was actually staying, I was forced to reassess and consider what would MacGyver do? The answer lay in the use of keys, a wooden stick from an ice lolly, a bit of rock and willpower. After ten minutes it finally opened, the first gassy hiss like the sound of 80,000 fans at the MCG cheering. It was now slightly warm but I obviously didn’t mind and the beer went down like the sun and the mood climbed like the moon. 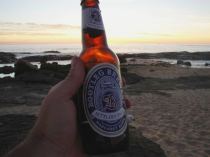 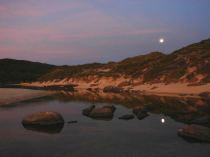 While offering spectacular outdoor beer moments like this, Australia has generally disappointed in its indoor drinking environment. Pubs are often bland behemoths with tacky decor and goddam awful pokies, an attached bistro offering an array of equally dull and not as cheap as it should be food. As a result, I love returning to the UK to duck into any one of its dark and dingy drinking holes and remember an archetypal rainy day in London a few years back where, killing time before meeting friends, the only answer was to pop into a random hostelry, drink a couple of warming ales and write postcards. Perversely, pubs in the UK tend to have better beer gardens too, perhaps a result of the local obsession with hanging baskets and, well, opportunities to drink away the misery on every street corner.

An English speciality is the country pub, often offering a roaring fireside, wooden tables and outdoor hanging baskets. Beers range from generic chemical concoctions to the occasional guest ale brewed in the local cowshed. It’ll be called something like Olde Spotted Dick or Malted Slipperypipe. To soak it up you can sample a menu ranging from cheesy garlic bread to cheesy lasagne to cheesy chips and perhaps even cheesy peas [5]. There will be an aroma of stale beer mixed with cow dung. And you’ll generally be made to feel welcome because everyone in there has been inebriated since 1972 and cannot be bothered anymore.

One very lovely country pub moment that I remember was in the equally lovely Lake District in northwest England. For a country as small and crammed as England it is remarkable how much of it has an alluring pastoral air and sense of light and space. In this regard, the Lake District is an absolute gem. On a surprisingly sunny and warm late summer’s day, with the farmers making hay and the sheep bleating contentedly, a small pub along the country lanes of Langdale offered up not a beer but a beautifully of-the-moment cider. Despite repeated attempts, that first cider on that first night could not be beaten. It was the official start of the holiday, the ‘we have arrived’ moment and perfectly set up a week of discovery and delight. 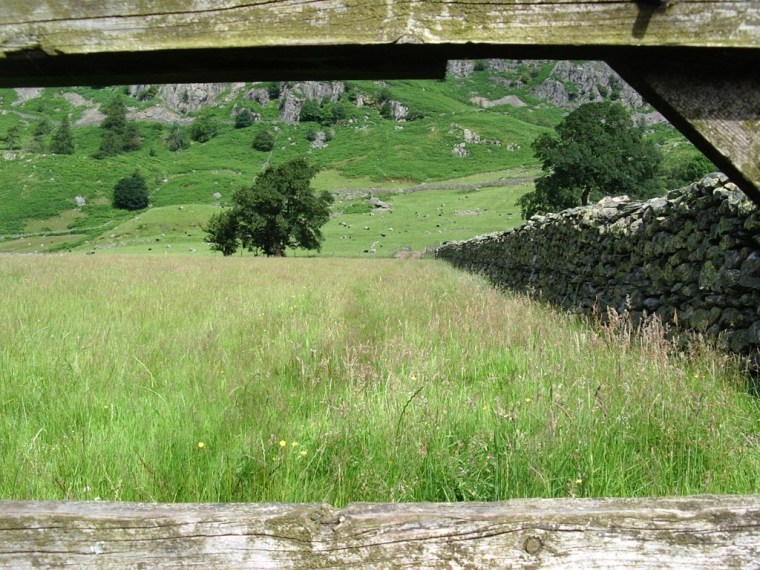 Would such moments have been the same without alcohol? One would like to think so, purely to reassure oneself that they are not dependent on booze. But in reality I don’t think a glass of lemonade would have cut it. Good beers (and ciders) emerge at the end of good days; they are both rewards and tonics. They can lift a moment from average to good, good to exceptional. And they trigger associated memories of time and place. They are the beer goggles that help us to look back on moments with a rose-tinted air. Sure, let us not overdo it, but let us also not dismiss beer as just another vice. Remember kids, drink responsibly, and if you can’t, best to head off on a Contiki tour with Lance.

[3] With the wonders of marketing however it is very acceptable to have the ‘Australian’ Fosters in England, but do not drink it (if you even find it) in Australia!

[4] Translated, for those of you who speak English, as ‘I purchased a 24 pack of beer bottles from the beer shop / off licence / liquor store’

Beers around the world: http://en.wikipedia.org/wiki/Beer_and_breweries_by_region