After an indifferent run up, the Christmas and New Year period decided to go all out Aussie and deliver roasting temperatures and blistering sun. What to do in such sweltering conditions?

Try and work with pastry and bake sausage rolls for old time’s sake? Probably not the best idea.

Escape to the air-conditioned comforts of a gallery or museum? Well, nice as long as you don’t get sucked into a vortex of neo-postmodern pastiche critiquing the conflation of pre-industrial conceptualisations with fifth-dimensional realism.

Shopping in malls and supermarkets then? Cool, but not usually great for the hip pocket and the hips.

Wading into the lake feels so tempting, but what about the prospect of blue-green algae and mutated carp for company? Ah, a mate’s pool, that’s better. If it isn’t like a hot bath after endless days of solar induction and steamy mosquito-filled nights. Yes, I wanna build a snowman! Please.

Logic would dictate that the South Coast could offer relief, with its sea breezes and refreshing waves. Perhaps it’s a lack of sleep or one too many egg nogs or something, but I defy the logic and head inland instead. My brain hasn’t totally frazzled, reasoning that surely it’s perfect weather to hang out in a cave. I can think of no better refuge. I mean if cheese and wine like a good cave, then surely what’s not to like?

Besides, I seem to be drawn to experiencing Australia at its most inhospitable. I think there is an authenticity in the parched hills of summer, the shredded bark of gums littering the road, the parrots drawn to muddy creeks, the constant wail of cicadas zapping the air. The Real Australia, some marketing undergraduate or large-hatted politician might imagine. A landscape on the margins, a long way away from my Christmas past. Presented in harsh technicolour – but with aircon – when driving through.

And so, to Wombeyan Caves, a spot I visited once in steady rain. How different that was. Despite arriving at a reasonably early hour today it is already hard work hiking through the bush to waterfalls that are dry and exposed paths that simply disappear. Still, the Visitor’s Centre has a fridge full of ice-cold drinks and the refuge of Victoria Arch is mere metres away. What a spot this is, like entering a Westfield on a forty-degree day, only without the slightly depressing thought of having to find solace in a Westfield. 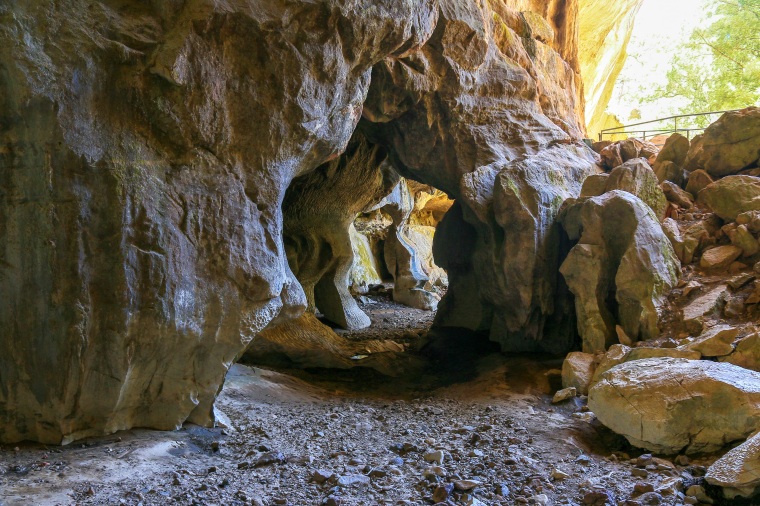 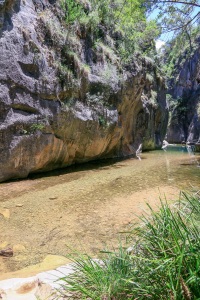 I think about munching on some leftover sausage rolls in here, but delay lunch for one other walk before the temperature peaks. It’s already midday and clearly above thirty. Shade is intermittent on the way down to Tinted Cave and the Limestone Gorge, where sausage rolls can be enjoyed beside a shallow pool of water popular with dragonflies and sweaty humans.

I feel pity for the extended families heading down to the gorge as I make my way back to the car. Laden with chairs and umbrellas and swimming gear, there is barely enough space to set up a picnic blanket for one. And from what I could tell, wading in the water is a trial of jagged gravel and slippery pebbles. “Is it worth it?” they ask. I offer hope and repeat what the lady in the Visitor’s Centre told me – “Go around the corner a bit and the water gets deeper.” I hope for them it does, though it may have already evaporated since this morning.

The peak of the heat hits when in the car and the aircon works overtime as I head back to Canberra via Crookwell and Gunning. A hallucinatory ice cream parlour fails to materialise in either town, and I end up with an iced coffee from McDonalds back on the fringes of Canberra. Brain freeze strikes, but I guess I wanted it cold.

The New Year approaches and passes with little respite. Only for a couple of hours around dawn do temperatures relent enough, prompting a frantic mission to open up doors and arrange blinds to coax some cooler air into my apartment at five in the morning. It feels like it’s been a losing battle by time the clock ticks round to nine. And then what? The mall, the pool, the library, the supermarket? Giving in and spending ten dollars a minute on aircon? Getting a permanent job in a cool office? It’s tempting now more than ever.

But we’ll make it through the worst. The sun will set and the temperatures will cool, just a bit. The colourful reward of light moving towards dark amplified as a breeze sets in. And a couple more turns of the Earth might finally bring a cooler change. A forecast 26 degrees on Sunday and perhaps – at last – a climate cool enough for a Christmas roast. It’s all relative. 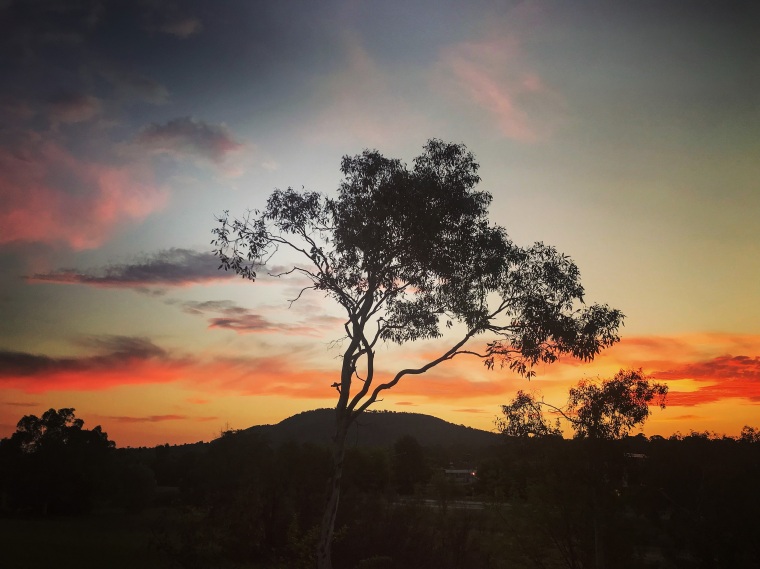