What were once, many month ago, memorable firsts are now becoming cherished lasts. Pasties. Cream teas. Crossings of the Tamar. Episodes of The Apprentice. Fleeting appearances of the sun. A sudden realisation that I’ll be in Australia in a couple of weeks has triggered a desperate clamour for final foodstuffs and must-do jaunts. Mostly foodstuffs…but there are minimum requisites to properly bid adieu – again – to this comely corner of the world.

Crossing the Tamar into Cornwall is one of them. Having wallowed in some tremendous sections of the county over the past few months, I decided to sign off in style. Winter may have brought miserable mild drabness, but it has blessed us with quiet roads which make the far, far west more readily amenable to a day trip. And open for a taste of genuine Christmas charm. 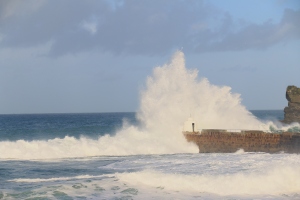 Driving through squalls on the best weather day for a while, I first paused next to the surging Atlantic in Portreath. Brisk winds had parted the clouds more generously than I had hoped, and the uplifting sea air was matched by a decent coffee and indecent chocolate salted caramel slice. Another cafe stop to store in the archives for future reference.

Westward from Portreath the coast road skirts booming cliffs and precipitous drama. At Godrevy, the massive expanse of St Ives Bay sweeps into the golden sands and stoic dunes of the coastline. Today the bay is lively, stoked by an unending blast of brisk southwesterlies and intemperate swell. The surge sounds incessant, thrusting and thrashing, cursing and crashing at England’s door. 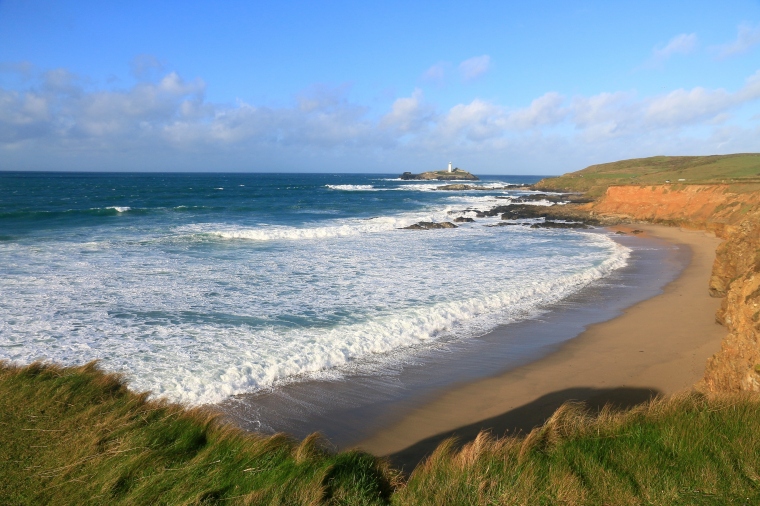 Seals shelter in deep coves while humans embrace the sunshine seldom seen. One member of the species slips on an innocuous patch of grass and is caked in mud for the rest of the day. The last time I hit the ground around here it was done with glee, jumping into the giant sand pits as a nine-year-old.  Other distant Gwithian memories include stinging nettles, six ounces of American hardgums from the old dear in the post office, and several jolly circuits on a campground in an orange Reliant Robin. Plus scenes of the lighthouse, steadfast on its island. Today as vivid as any a memory. 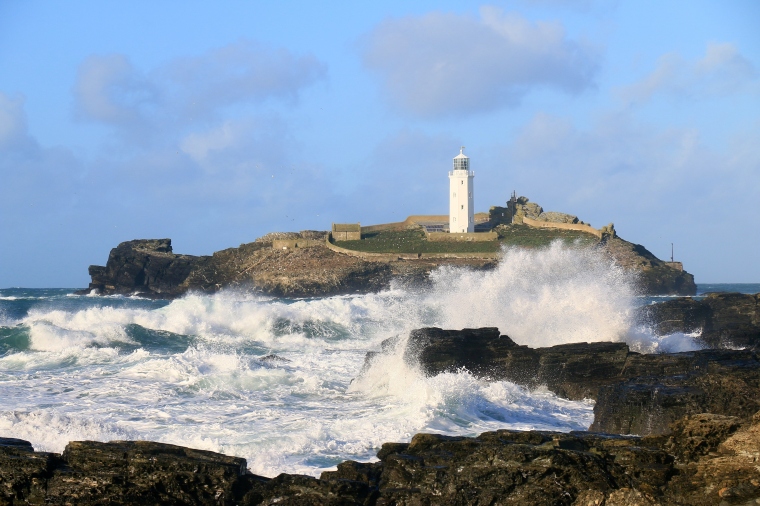 More memories can be made with a proper job pasty experience, vital for the Cornish farewell. I have had a few. However, in a radical departure from the norm I planned my attack for Marazion, vaguely recalling a tiny bakery here serving delicious bundles of scrumptiousness. And there, on a corner of the higgledy-piggledy high street, it stood. Closed. Still, consolation came from the vista across Mounts Bay and the ever-photogenic St Michael’s Mount. 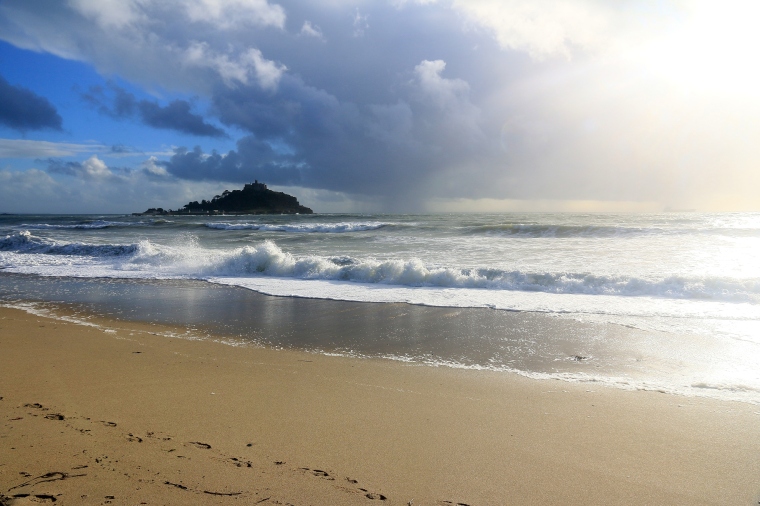 Luckily there is a little place I know back up the road in St. Ives, known as Plan P. It has served me well in the past. Today, on the Sunday before Christmas, the miracles of St. Ives included finding some free on-street parking, dodging a nasty-looking shower, and feeling grateful that one of the few bakeries open was open. A few lingering seagulls paced around opportunistically, but they didn’t stand a chance. 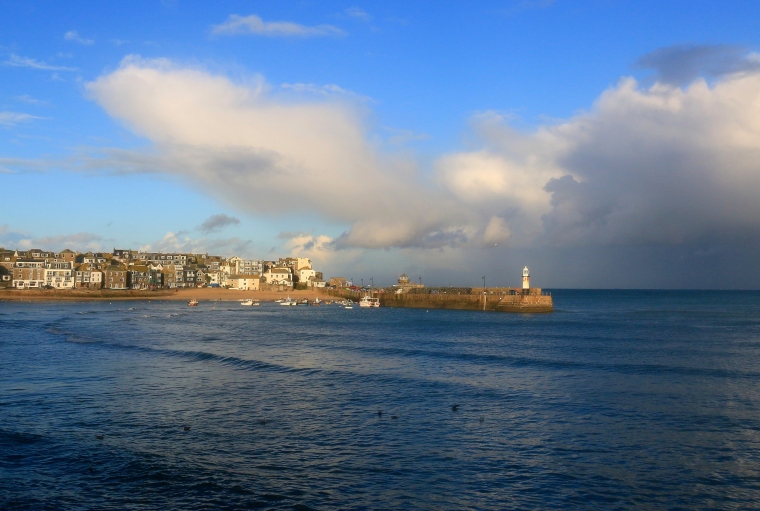 Ragged cliff walks, booming seas, sweeping sands, plump pasties…all classic Cornishness ticked off in a few hours. This year’s farewell comes with a difference though, being deep in the depths of December. Thus far I have struggled to rediscover the delights of a northern hemisphere Christmas – the build up seems a needlessly drawn out affair and the climate has been pitifully non-Dickensian. I was hoping Mousehole might change that. 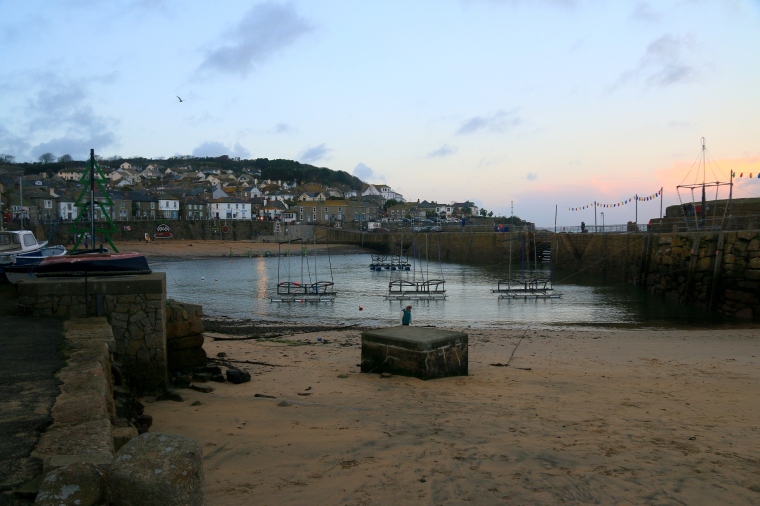 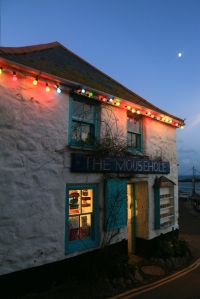 Tucked away along the coast from the Penzance-Newlyn conglomeration, Mousehole is fairly unremarkable in being yet another remarkably quaint and cosy fishing village perched upon the Cornish coast. Dinky cottages meander along narrow streets and nestle in its hillsides. Small boats rest ashore upon stony harbour walls. Briny smells and hollering seagulls pervade the air. A pub tempts, and tea shops too. It could easily be Mevagissey or Port Isaac or Portloe or Polperro. But it is Mousehole, and it is Christmas. 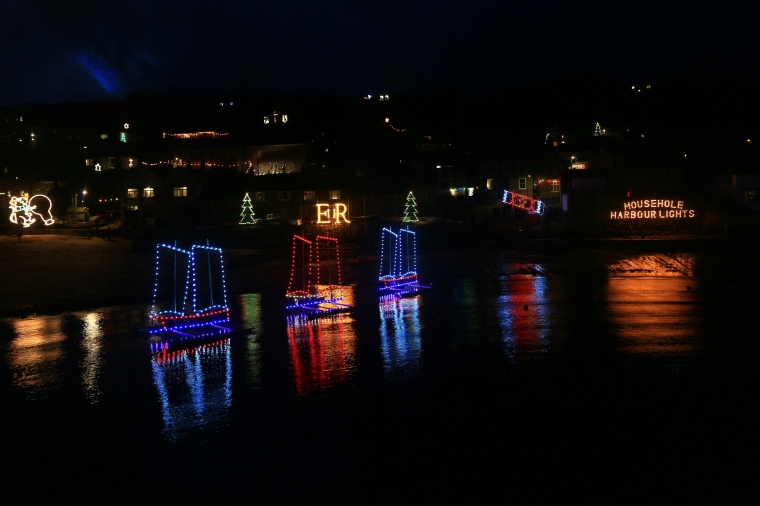 Sure, the weather hardly evokes a Christmas card scene, but the harbour lights delight. Lanterns line the sea wall and crisscross their way above the busily constricted streets. Festive shapes twinkle and shimmer off the water. The pub is jammed with bonhomie and drooling lines spill out of Janners chippy. While a brass band wouldn’t have gone amiss, it is as close to the unrealistic Dickensian vision of a Cornish Christmas I had yearned for. And today it is the icing and marzipan on a special goodbye cake. Avv an ansom krissmus one and all. 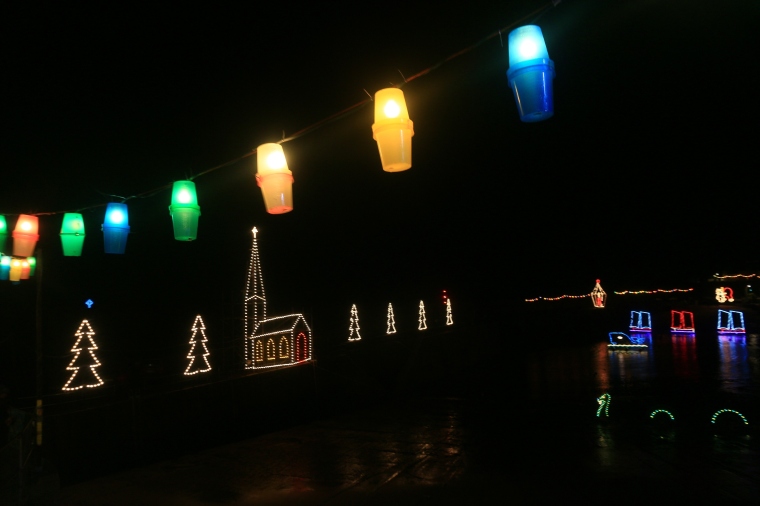