I reckon every city and town and village and hamlet should have its own special ‘day’. It should be a time for locals to come together to take stock over what they have collectively achieved and to dream of what can yet be achieved. An opportunity to dress up for those from outside looking in, welcoming others into a collective ample bosom designed to make them say things like “Yeah, you know this really is quite a nice spot.” A symbiotic way for the place to provide something back to its inhabitants, made only possible by its inhabitants putting something into the place.

If Canberra Day is anything to go by, such extravagance is elongated over several weeks sometime around March. With the seasons commencing a transition, it is one final agreeable hurrah, a lingering celebration of another summer before thoughts of hibernation and exile set in. It is still warm but the days are shortening, making it an ideal time for pre-dawn balloon ensembles and post-dusk illuminations. You don’t have to get up too early or stay out too late, and you don’t yet have to risk strangulation in a melee of scarves and hats and fleece blankets because it has dropped to something arctic like ten degrees.

One recent Friday in March offered a sumptuous day of deep blue skies where it was nudging a far from arctic 30 degrees; warmth that seeped into the night and made a very slow amble around the Parliamentary Triangle all the more comfortable. At scattered intervals the huge geometric edifices of the national institutions thrust up as multicoloured beacons, drawing moth-like the throngs of humans revelling in an evening of enlightenment. A beautiful day shifts into a beautiful night. 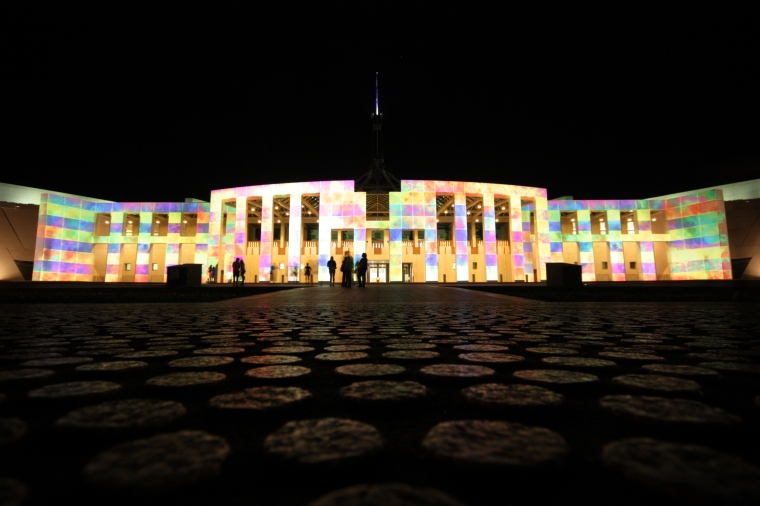 Cooler and with showers threatening, a Sunday morning is cloaked in a pre-dawn gloom. It’s fairly early and the streets are even quieter than usual. It’s that peaceful time of day, a serenity that becomes confronted by parking battles and swarms of people as dawn breaks once more in the Parliamentary Triangle. As quick as the light emerges, balloons rise up from the ground; once flattened tarps smeared across the lawns inflate into rounded bulbs of colour and misshapen eccentricity. The sun sneaks up from the eastern horizon as people wave gleefully from wicker baskets shooting up into the sky. They shouldn’t look so bloody cheerful…they seem to be heading somewhere over the rainbow and into that storm. Oh well, good luck to them, I’m off to grab a coffee.

Monday, and it’s a public holiday, all to celebrate the 101st birthday of a city. Ironically many use it (with the attaching weekend) to flee the place. It’s as if the Prime Minister has just let off the stinkiest fart known to humankind from the flagpole of Parliament House, causing people to rush out onto the Kings or Federal or Monaro Highways in some sense of manic delirium. They head back later on the Monday, once the air is clear. 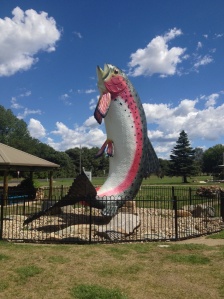 Being a flexible fellow, and paying attention to the weather forecast, I stayed put until Monday. The day was sunny and I decided – with a spontaneity that still involved making a couple of lists – to head up into the hills for a spot of the old driving-walking-camping experience.  It was an enjoyable drive and involved some new road, taking in the Snowy Mountains Highway to Kiandra and then heading over a lumpy and curvy Alpine Way down to Khancoban. There was even – and this clearly denotes a successful road trip – a big thing at Adaminaby. Little over a hundred kilometres from Canberra and it is shameful that this was my first Big Trout sighting.

The barren, frost-scarred plains of this eastern side of Kosciuszko National Park gradually transition as you head west, down through a verdant paradise of tall gums and ferns on the wetter, western side. From here, views of the Main Range are a tad more dramatic, captured at the captivating Olsens Lookout. The plunging of streams can be heard rising from the deeply cut valleys, all making their way, eventually, into the Murray River. Before that, at Geehi Flats, waters trundle along the broad Swampy Plains River, offering a genial spot for camping and, quite probably, Big Trout. Until the storm rolls in…

So much for the weather forecast but I guess these are technically mountains and mountains are known to find weather a fickle companion. With rumbles of thunder close, the rain started pretty soon after parking up, before any swag had been resurrected. With no obvious sign of letting up, and with some distance to travel on slippery surfaces to a town that may or may not have a dodgy motel, I decided to complete my intense road test of a Subaru Outback. Just how well do the seats fold down to form a spacious sleeping area?  The answer: well, not too bad…ten extra centimetres of legroom would have been handy but I slept…well…no worse than I would have done in the swag.

Still, it was nice to stretch the legs the next morning which predictably dawned all damp and misty, but dry and with the sun only very reluctantly breaking through clouds. A drive up over the range and heading back east demonstrated the transformation of plant life once again. Near the road’s highest point at Dead Horse Gap things were more barren once more. Perhaps a surprising spot to take a walk but I was pleased, following the course of the Thredbo River into the Pilot Wilderness, to find myself in somewhere just slightly akin to a Dartmoor valley or a Welsh llanfygwryff-y-pobbblygwrwrochcwm. 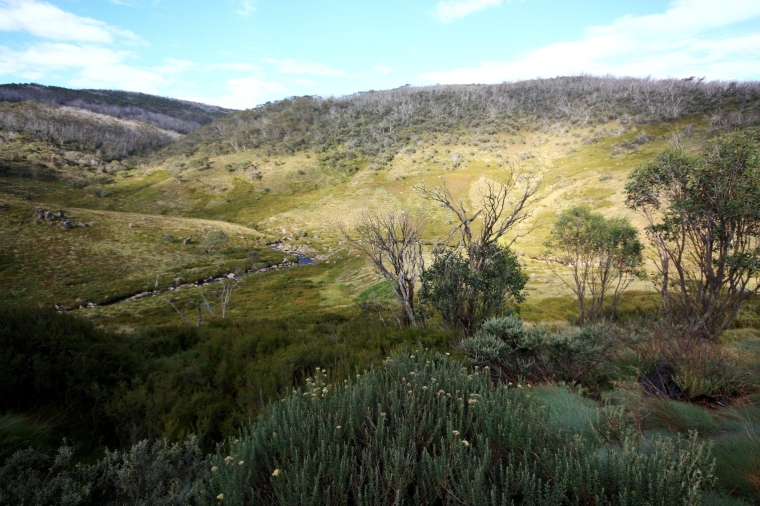 I was heading along the Cascades trail which leads to a hut called – you guessed it – the Cascades Hut. I couldn’t be bothered to go all the way to the hut (18kms return), but made it to Bob’s Ridge and back (shall we say, with a bit of meandering, 10kms). Being a ridge there were some views, west and south into Victoria, though frequently obscured by stunted and bare gum trees.

Anyway, it was nice to partially recreate the feel of a bit of upland Britain. Being in the Australian Alps I was also happy to try and recreate an Alpine mountain sandwich, consisting of bread, cheese and cured meat. Again, it was no fancy ooh la la baguette avec fromage et saucisson, but filled a hole at the very pleasant riverside setting near the end of the walk.

Of course, on a birthday weekend such as this I need to top off this eating with some birthday cake. I dutifully obliged with a bakery treat in Jindabyne on the way back to Canberra. With a coffee. Borderline country coffee. Which made it undoubted road trip cuisine. Which made a return to Canberra, with its guarantee of good coffee, all the more inviting. And for that, I’m very pleased to wish it a happy birthday indeed.