The problem with travelling around the Pacific Northwest, at any time of year, is the range of gear you need to have on hand ‘just in case’. October especially is the most transformational of months, where one summer day can cling on with a happy warmth and calm, only to be usurped the following dawn by the approach of tempestuous rain fronts delivering the first mountain snows. Shorts and sunhats become wellies and waterproofs.

The joy of travelling around the Pacific Northwest, at any time of year, is the range of weather and landscapes you can enjoy. There appear a seemingly endless combination of elements to experience, even in a compacted space and time. There may be clear calm days on the placid sounds around the San Juan Islands, only a distant whale shattering the glassy surface of water. Further down the coast, chilling winds and squally storms may be thrashing at the sweeping Oregon beaches, delivering driftwood with the salty foam, and sandblasting stooped figures that mingle amongst the shores. Rainforests are shrouded in misty cloud, soaking up like a sponge the contents of the Pacific Ocean, while woodlands of toilet fresh pine offer up sunny glades of grazing deer and dappled riverbanks. Rising up, alpine lakes and meadows of flowers glow in the sun, shadowed by the sky-scraping volcanic peaks of the Cascades, whose heights can quickly draw clouds like a magnet and absorb massive dumps of snow. Beyond their reach, barren desert lands carved with rocky canyons and dusty plateaus stretch away into the east.

It was rain that was on the cards one early October morning in Sammamish, a pleasant surburban satellite town east of Seattle. Thoughts of Halloween were emerging, as pumpkins peppered manicured gardens and witches brooms disturbed the wholesome air. The previous day’s joyously warm sunshine was rapidly fading and indoor activity was sensible, hence I headed towards Paine Field, where some of man’s achievements can be marvelled at in the Boeing factory [1]. Here, colossal sheds and colossal gift shops house incredible components and machines and plastic cups with curly straws. Huge underground service channels burrow their way through the complex, sheltered from the fickle elements that are a part of life in Washington State.

A short plane ride or, in my case, a circuitous journey west of here lies the Olympic Peninsula. If Paine Field provides an impressive depiction of what can be done by humans, the Olympic Peninsula is a reminder that nature is equally as showy. At its southerly end, the state capital Olympia has that gracious, fading air of autumn. Grey clouds hover but rain abates; instead leaves fall from the sky like paper planes zigzagging silently on the breeze, congregating into quivering puddles of red, green and yellow. Trench coats and trilbies are not out of place around the parliament, a domed building so reminiscent of capitol hills across the land. Despite being the capital of Washington, it feels like a town on the fringes, out of the way and barely featuring on the national consciousness. An outpost from Seattle and a staging post for the wilderness to the north.

Daylight seems to have barely greeted us as it disappears in the evening, and a night stop close to Lake Quinault beckons. A composite of faded green shades cloaked in mist, raindrops rippling on the water, people and animals in temporary hibernation. A pleasant riverside motel appears somewhat more foreboding in this atmosphere, but it is a refuge in which to shelter under blankets and be thankful that you have a roof over your head and pizza around the corner. A roof that amplifies every raindrop that sweeps in throughout the night, thrown around by the wind and launched onto surfaces with incessant force.

The next day begins no better, as water continues to permeate deep dark spruce forests and transform walking tracks into haphazardly sculpted rivulets. The car now is the refuge, pushing through one final heavy squall on its way to the coast. Here, things are clearer, the wind whipping clouds at great speed away from the sun. But dampness remains the theme, mighty waves of the Pacific driving up the sand and coating endless piles of driftwood with a tidal surge. My feet, caught up between a rock and a hard place, are not escapable from the water at Second Beach, but the sun is now warming and consoling, and a change of shoes is but a short trek away. The end of the world feel at La Push is now contradicted by the bright and breezy elements around. 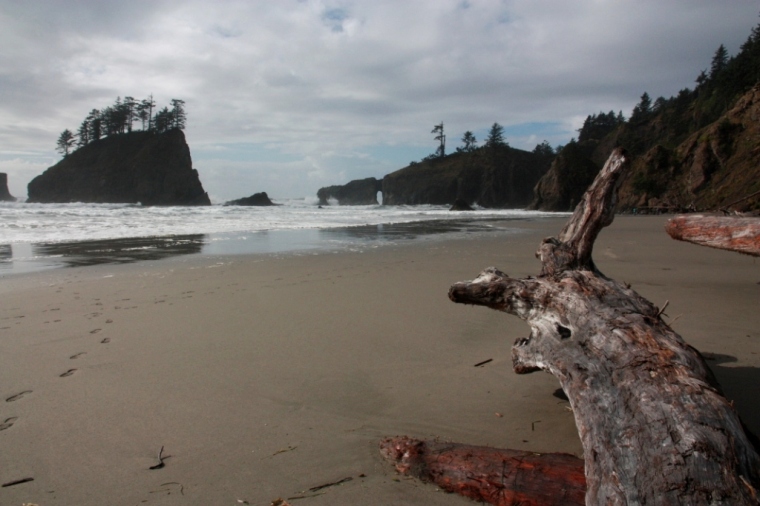 Back inland, the light fades and mists once more mingle in between trees. The Hoh Rainforest is a rainforest by name and a rainy forest by nature. I did not see any Hohs. I would imagine it would feel unnatural here on a dry and sunny day. Sponges of moss stifle trees and grow bloated with water. Beards hang down from their branches, and the trees take on a life of their own, like some terrifying monster from a Scooby Doo cartoon [2]. The air has an edge of intimidation to it, a slight feeling that you are trespassing on a very ancient, primeval world. You should take a few photos and leave things be. Otherwise the trees may come and get you.

Contrast elevates the small town of Port Angeles to a thriving metropolis. Traffic lights and a small city block, supermarkets and docks, a place to feel comfortable for the night. And awaken to a dry start where the sun rises from the east, illuminating Vancouver Island across the Strait. The rising sun does not take long to be swallowed up by a leaden sky, and rainbows form somewhere between the US and Canada, like some symbolic hand-holding hippy statement of peace and free trade. Mountains behind me reach into the clouds, their height cannot be fathomed as they vanish into the sky. But there is a road you can follow that will take you there to find out.

On days of dubious looking weather, Hurricane Ridge does not sound the most appealing place in the world by name alone. But rising from sea level to 5000 feet certainly offers an uplifting experience and one in which you finally come head to head with the elements that have been your friend and foe on the peninsula. Of course, the change in altitude also brings change in vegetation and landscape; mildly undulating pine valleys become steeper and barer, clinging to rocky cliff tops and giving way to alpine meadows. Just after 4000 feet, as life becomes sparser and bleaker, so too does the weather and it is not long, as you climb at a steady gradient, before the car roof kisses the bottom of cloud, and then disappears into it altogether. One less Toyota Prius on view to the world.

I imagine the views from here are tremendous, the ecosystem rare and unique and blessed, a pinnacle within a peninsula so raggedly variedly beautiful. But the elements have indeed been fickle and today, as days deepen into October, there is one final affront: snow. A whiteout of gentle proportions that is at least recompense for the murky vista. A scene from Christmas come two months early, dusted icing covering fir trees, icicles forming at their edges, the satisfying crunch of virgin snow underfoot.

A visitor’s centre offers shelter from the cold and all the amusement that a 3D contour map and short video film can provide. Which is, for me, actually quite a lot of amusement. The map a chance to at least imagine what it might look like outside, and which peaks lie in which direction. The film a chance to see what it looks like outside, on a far superior summer’s day, where marmots prance amongst the flowers and lucky tourists come to admire the peaks in all directions. But today no magical transformation upon leaving the small cinema, a transformation that had happened a couple of weeks earlier in similar circumstances around Mount St Helens, when the landscape emerged out of the clouds as the curtains wound back to reveal a ravaged peak. Here still nothing.

It did not take long to descend to be in the clear again, but the very tops of mountains stubbornly refused to separate themselves from the layer of cloud. With typically grudging optimism I gave it one more shot, ascended again, and was amazed that things had improved. You could now see about 20 metres into the distance rather than 10. But this was an improvement, and a trend was setting in. Suddenly you could sense cloud formation and movement rather than a uniform whiteness. Elements were changing again. And while the vista did not exactly become cinematographic, gaps formed and meadows appeared, snow started to fade and drip from trees, peaks became visible through the windows of clarity. It was enough to send you off back to Seattle content, pleased that the elements had at least offered up some compromise.

Of course the next day was beautifully sunny again and, from downtown Seattle, across Puget Sound, the mountains of the Olympic Peninsula shone bright. This was not the first dalliance with mountain sightings that had come back to taunt me the next day: Mount Baker, Mount Rainier, Mount Hood and, now, Mount Olympus all giving up little in my presence but shining out from further afield. There was warmth back in the air and the need to discard of a sweater. The elements were once again dictating the terms in this corner of the world. Setting moods and scenes and sartorial choices. Making every hour of every day different. Shaping the variation, colouring the land, enriching the environment. And continuing to make packing a conundrum for those who have the good fortune to visit it.

[1] Where some of the first Dreamliners were coming towards the end of the production line. I had nothing to do with it.